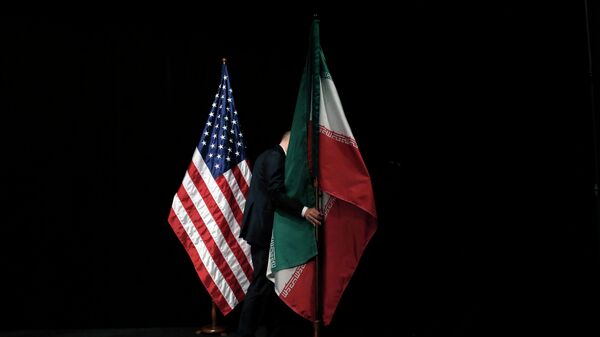 WASHINGTON (Sputnik) - The US government announced earlier that it was reimposing two new waves of sanctions targeting several of Iran’s economic and industrial sectors, which prompted the EU to put countermeasures in motion.

US-Iranian tensions have heated up recently over Tehran boosting military exercises in the Persian Gulf and allegations that Iran has violently cracked down on unarmed citizens. In recent weeks, US President Donald Trump has sent mixed messages to the government in Tehran by claiming he was open to talks without preconditions just days after issuing existential threats.

The sanctions will come in two waves, a senior administration official told reporters on Monday, the first of which will go into effect at midnight local time. This represents the first wave of sanctions against Iran since the United States withdrew from the Joint Comprehensive Plan of Action (JCPOA) in May, the official added. The second round of measures will go into effect on November 4.

Trump’s Reinstated Sanctions on Iran Amount to ‘Economic Warfare’
US President Donald Trump in a statement issued by the White House on Monday said despite these new sanctions he is still open to engaging in dialogue.

"As we continue applying maximum economic pressure on the Iranian regime, I remain open to reaching a more comprehensive deal that addresses the full range of the regime’s malign activities, including its ballistic missile program and its support for terrorism," Trump said.

The first wave will target Iran's acquisition of dollar bank notes, trade in gold and other metals, transactions related to the Iranian rial, and purchases of commercial passenger aircraft, and the automotive sector.

The anti-Iran sanctions effort by the United States are a means of pressuring the Iranian government to change course and stop pursuing nuclear weapons, the US government representative said.

The second wave of sanctions, which targets Iran's oil exports and energy sector, will take effect on November 4, according to the White House. At that point, the US government will reimpose the remaining sanctions that had been previously lifted under the JCPOA, the official said.

The second wave will target Iran's oil exports, financial institutions and the shipping sector. In addition to reimposing sanctions, the United States is putting together a global coalition to counter Iran's malign activity, the official said.

"We are… working to build a global coalition to counter Iran’s malign activity," the official added. "We have made it very clear that we’re going to aggressively enforce this executive order… [and] we will work with countries around the world to do so."

Germany to Protect Its Companies’ Exports, Investments in Iran From US Sanctions
The economic pressure campaign, the official continued, is also designed to deny Iran the financial resources to finance terrorism. The United States is happy that several entities around the world have backed these efforts.

"We're [the United States] very pleased that nearly 100 international firms have announced their intent to leave the Iranian market, particularly in the energy and the finance sectors," the administration official said.

Trump in his statement on Monday urged all partnering nations to take steps to pressure Tehran to change its destabilizing behavior and reintegrate with the global economy instead of isolating its economy.

Israeli Prime Minister Benjamin Netanyahu in a statement on Monday welcomed the newly unveiled sanctions and called on the Europeans to do the same. However, the Europeans apparently had something very different in mind.

The European Commission in a statement on Monday said the EU will block US sanctions against Tehran starting August 7 in order to protect the interests of EU companies doing business with Iran.

"As the first batch of re-imposed US sanctions on Iran takes effect, the EU's updated Blocking Statute enters into force on 7 August to mitigate their impact on the interests of EU companies doing legitimate business in Iran," the commission said in the release.

The amendments to the Blocking Statute were approved on July 16 by the foreign minsters of the EU member states. The updated legal act is expected to invalidate Washington's judicial decisions and administrative actions within the framework of anti-Iran sanctions on the territory of Europe, and, therefore, forbid EU-based companies from complying with the US restrictions.

World
Bolton: Iran Should "Come to the Table" If Wants to Avoid US Sanctions
In a joint statement released earlier on Monday, EU foreign policy chief Federica Mogherini and the foreign ministers of France, Germany, and the United Kingdom expressed their regret over the reintroduction of US sanctions against Iran, previously lifted as part of the multilateral deal on Tehran's nuclear program.

They further explained that the JCPOA was working, and that Iran's nuclear program was peaceful as confirmed by the International Atomic Energy Agency (IAEA) in 11 consecutive reports.

US Senator Richard Durbin in a press release expressed concerns that Trump’s move would divide the United States and its allies.

"Today’s actions, yet again, put the US in violation of this deal [JCPOA]," Durbin said on Monday. "It risks reopening a resolved conflict, and will divide us further from our European allies. President Trump’s foreign policy is a dangerous gamble with nuclear weapons."

The nuclear agreement with Iran, Durbin added, "has worked, and continues to work."

'Main Beneficiary of US Sanctions on Iran Will Be China' – Political Commentator
Iran, for its part, also swiftly hit back with accusations that the United States was attempting to destabilize the country.

Iranian Foreign Minister Mohammad Javad Zarif told reporters on Monday that Washington's decision to reimpose sanctions against the Islamic Republic, which in particular targets the country's civil aviation industry, was aimed at destabilizing the country.

"Trump Administration wants the world to believe it's concerned about the Iranian people. Yet the very first sanctions it reimposed have canceled licenses for sales of 200+ passenger jets under absurd pretexts, endangering ordinary Iranians. US hypocrisy knows no bounds," Zarif said in a Twitter post later in the day.

Shortly after the sanctions were announced on Monday, former CIA Officer Phil Giraldi told Sputnik that the real reasons and motives for the sanctions are much different than those expressed by the Trump administration.

"Washington is clearly hoping that the vox populi [voice of the people] will be heard throughout the land and the Iranians will rise up in revolt," Giraldi said.

The Iranian national currency, the rial, has been falling since May when Trump announced the US withdrawal from the Iranian nuclear deal and the initial reintroduction of sanctions against the Islamic Republic.

World
US Building Global Coalition to Counter Iran's 'Malign' Activity - US Official
On May 8, Trump announced that the United States was withdrawing from the JCPOA and would be reinstating sanctions on Tehran that were lifted under the agreement. The decision gave foreign companies grace periods of 90 to 180 days to stop trading with Iran.

The JCPOA was signed in 2015 after years of diplomatic work by the group of 5+1: Iran, the United States, the European Union, China, France, Russia, the United Kingdom, and Germany. After the US withdrew, the rest of the participants reiterated their commitment to the deal, which stipulates that international sanctions can be gradually lifted if Tehran maintains a peaceful nuclear program.