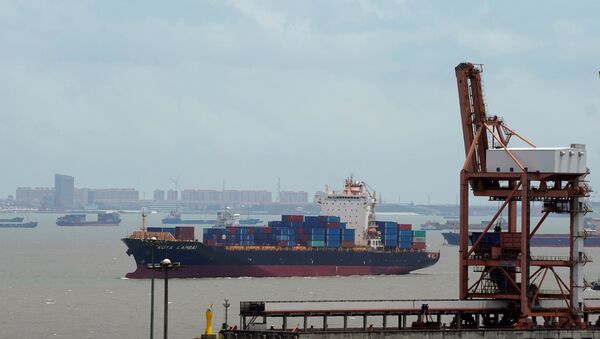 US Secretary of State Mike Pompeo has warned that Washington will enforce sanctions on Iran, adding that the restrictions on Tehran are aimed at pushing back against the country's allegedly malign activity.

Sputnik: In your view, what effect will the newly re-imposed US sanctions have on Iran's economy?

Brahma Chellaney: It could have a crippling effect on Iran's economy because it could force a number of other important trading partners of Iran to reduce the links with Iran or even cut off the trade ties with Iran. The fact is that the Americans, by slapping Iran with punitive sanctions, are aiming to choke its economy.

Russia's Rusal Reports Double Increase in IFRS Net Profit Amid US Sanctions
The intent is to block trade and financial activities with Iran by all other states. In effect, what the Americans are seeking to do is that when they apply sanctions, they give these sanctions extraterritorial effects, which effectively turn national sanctions into global measures. This is what the US is also seeking to do with Russia by this new law called the Countering America's Adversaries Through Sanctions Act, or CAATSA, which is designed to wean countries away from dependence on Russian arms so that the American arms industry can be boosted.

The Iran sanctions have a larger geostrategic intent and these extraterritorial sanctions are designed to gradually throttle the Iranian economy and increase the geopolitical power of US allies in the region like Saudi Arabia.

Sputnik: What industries will be the most affected or are we looking at a blanket of all the different industries? It seems that the USA is really ratcheting these sanctions up from the latest news and, as per what you're saying, it's really going to damage Iran, isn't it?

Brahma Chellaney: Absolutely, but I think that sanctions that take effect today aren't going to be as crippling as the second set of sanctions that will take effect from early November when the shipping and petroleum-related sanctions kick in. That's when the Iranian economy is going to feel the real pressure. Today's first round of sanctions is a warning shot to Iran from the Trump administration, which has an obsession with Iran.

EU to Block US Anti-Iran Sanctions Starting August 7 to Defend Business
Just the way that Washington's power elite has succeeded on Russia, a generation after the Cold War ended. The Trump administration has similarly succeeded on Iran, even though from a larger geopolitical perspective, looking at the American interest, American engagement with Iran would certainly mesh with American interests.

But the Trump administration is doing the opposite by building up problematic states like Saudi Arabia, Qatar and the UAE and seeking to undermine Iran. That really means that these Wahhabi states that are exporting fundamentalism and terrorism to different parts of the world, their power has been boosted, while Iran is sought to be weakened.

Sputnik: Iran has loosened its currency regulations in a bid to offset the damage; do you think that these measures will be effective?

Pompeo Vows to 'Enforce' US Sanctions Against Iran - Reports
Brahma Chellaney: Only partially, but I think that Iranian economy is going to reel from the American sanctions. The fact is that most international transactions, from banking to oil, are conducted in US dollars; the US dollar is the world reserve currency, it greases the wheels of the global financial system, it arms America with tremendous leverage, which is why the US sanctions are the most powerful in the world. Even if Iran deals with other countries in their national currency, the effects of the sanctions on Iran will nonetheless be quite acute.

Brahma Chellaney: The EU doesn't buy too much oil from Iran now, but three-quarters of Iran's oil exports go to four Asian economies — China, India, South Korea and Japan. South Korea and Japan are going to, for sure, obey the American sanctions. India is going to feel a lot of pressure because Iran is a very important supplier of oil to India. It's a traditional supplier of oil to India and it cannot afford to snap its energy ties with Iran.

So these US sanctions are going to compound India's foreign policy challenges, especially as to how to balance India's relationships with different powers. But I think the main beneficiary of the US sanctions on Iran will no doubt be China. For one, there will be more Iranian oil for China. China is already the biggest buyer of Iranian oil, but now, because China has said very clearly that given Trump's tariff war against Beijing, China will not obey the American sanctions. It has no reason to adhere to the American sanctions, so there'll be a lot more Iranian oil for Beijing.