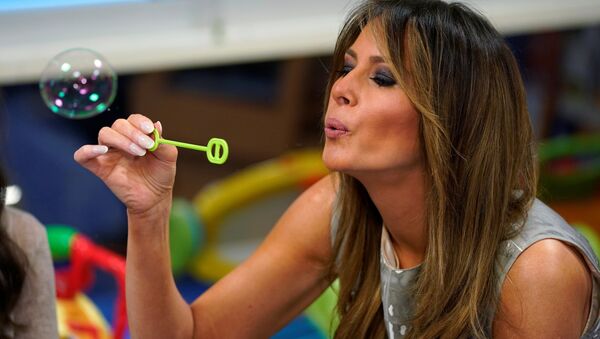 The First Lady stood apart from her husband, who questioned the NBA superstar's intelligence in a fiery Twitter tirade. Another basketball legend, Michael Jordan, also sided with James, praising his "amazing job for his community."

The day after US President Donald Trump launched a late-night stinging Twitter attack on NBA superstar LeBron James, First Lady Melania Trump said she would be open to visiting James's I Promise public school for at risk-students in Akron, Ohio.

"It looks like LeBron James is working to do good things on behalf of our next generation and just as she always has, the First Lady encourages everyone to have an open dialogue about issues facing children today," Melania said in a statement released by her spokeswoman.

On Saturday, retired NBA superstar Michael Jordan, who was mentioned in the Trump-James online fray, spoke out in support of LeBron. "I support L.J. He's doing an amazing job for his community," Jordan told NBC News through his spokeswoman.

This comes shortly after Trump took a personal jab at LeBron, who was interviewed by CNN's Don Lemon. Trump said that Lemon, "the dumbest man on television," made the basketball star "look smart, which isn't easy to do." "I like Mike!" the President added in an apparent reference to Michael Jordan.

In his interview with Lemon, James scolded Trump for being "divisive" and slammed his "lack of understanding about how kids look up to the president."

The online feud started a furor on social media, with some users voicing doubts about the First Lady's sincerity and claiming she has no right to speak out.

Don't let Melania Trump's praise of #KingJames distract you from the fact that her husband is ruining our country. I could give a damn about their problems, the house is on fire, y'all.

I’m sorry but hard to believe this coming from a First Lady who wore a “I don’t really care” jacket on a visit to children who were taken away from their parents by “her” husband! Hope LeBron invites Michelle Obama instead! A real caring, and loving Flotus!

I think it’s intentional dog-whistling to a base of supporters while cynically appealing to reasonable @GOP voters who want to believe they aren’t supporting a racist. @IvankaTrump no longer an effective foil.

@FLOTUS happens to be an illegal immigrant who shouldn't even talk

Others, however, praised her backing of LeBron, calling it "truly beautiful."