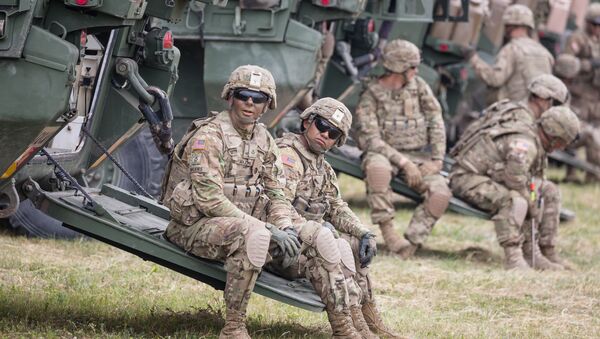 With Warsaw considering permitting the establishment of a US military base which the country's Defense Ministry sees as a "message to Russia," Polish political scientist Andrzej Zapalowski told Sputnik that the move is unlikely to add to the maintenance of security in Poland.

Zapalowski, who is also author of the book "Poland's Security in the West's Geopolitical Game with Russia," pointed out that "if Warsaw needs a new division, it should be created within the Polish army."

"And if the US wants to help us, why don't they provide us with military equipment?" Zapalowski said, adding that the deployment of any foreign military base on Polish territory does not imply any security guarantees for Warsaw.

He warned that it is foreign bases in Poland that "may under any pretext become a reason for various actions from someone else."

"Yes, I agree that the creation of large US [military] bases in Poland will not be the best solution. Poland must rely on its own military potential, which should be used for interacting with our allies," Zapalowski underlines.

In this vein, he underscored the necessity of Warsaw developing better relations with Russia, which he said could add to a more stable Europe.

READ MORE: NATO Builds Up Presence in Poland Despite Lack of Real Threat From Russia

"I am deeply convinced that our countries do not need conflicts in the part of Europe where we are located. We do not want tension and the destabilization of society to arise near our state borders,"  Zapalowski said, referring to "more threats emanating from Asia, the Middle East and Africa."

Earlier, the Polish Defense Ministry said that Warsaw is ready to pay up to two billion dollars for the deployment of a permanent US military base in Poland, which will include "an armored division."

The Russian President's spokesman Dmitry Peskov underlined in this context that Poland had a sovereign right to establish a US military base on its territory, but that Moscow, in turn, was ready to respond in kind to the NATO's infrastructure expansion.

Retired three-star US Army General Ben Hodges, for his part, wrote in Politico that "many of our allies would see the establishment of a US military base in Poland — or anywhere else in Central or Eastern Europe — as unnecessarily provocative."

"It would give Moscow an easy opportunity to claim that NATO is an aggressor and to somehow respond to protect Russian sovereignty," he noted.

US Urges Its European NATO Allies to Ready up More Troops in Bid to Deter Russia
NATO has been significantly increasing its presence in Eastern Europe in the wake of the Ukrainian crisis in 2014 using alleged Russian interference in the Ukrainian internal affairs as a pretext.

Moscow has repeatedly voiced its protests against NATO's eastward expansion, saying that the move will undermine regional stability and result in a new arms race.

The views and opinions expressed by Andrzej Zapalowski are those of the analyst and do not necessarily reflect those of Sputnik.