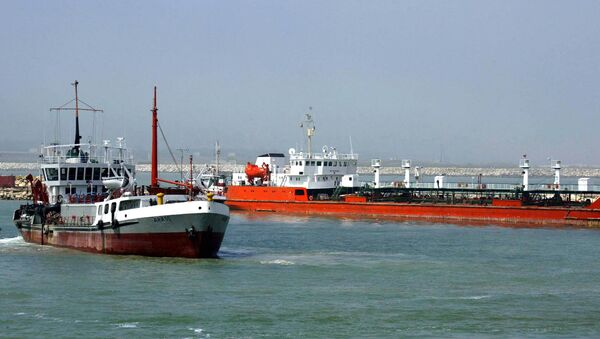 India and Iran have worked out a strategy to avoid hurdles in the payments for oil shipments and their insurance coverage in the backdrop of Indian insurers shying away in fear of losing access to the US market due to fresh sanctions on Iran.

The National Iranian Tanker Company (NITC), insured by Iranian insurers, has started supplying crude to India and has conveyed to Indian authorities that it would continue doing so in the future as well, an industry source told Sputnik.

"Iran has provided its own cargo ships and insurance to supply crude oil to India. It is a major relief as of now," the source told Sputnik.

'US Sanctions on Iran Will Not Have Any Impact & Will Fail' - Oil Economist
It was feared that India's oil imports from Iran could be affected from the end of August, as Iran has offered a 60-day credit period on oil sales to India, which means payments for cargoes lifted in the end of August would be due in November when the second tranche of American sanctions commences. Indian insurance firms, which have major exposure to the US financial system, have therefore refused to provide insurance to cargoes lifted in July itself.

READ MORE: Germany: Up to India to Go Ahead With Iranian Oil Imports Amid US Sanctions

Last week, Indian commerce ministry officials had conveyed to US trade representatives in New Delhi that it was not possible for Indian refiners to stop purchasing oil from Iran, citing several reasons. Although the meeting did not provide solutions to India's concerns, India had firmly conveyed that the state-owned refiners were not going to cut imports to zero due to the sanctions.

Sputnik discussed the payment issue with several government officials in the last few days and most of them exuded confidence that a solution would be found in the next few days.

Iran Becomes Second Largest Oil Supplier to India, Replaces Saudi Arabia
Earlier this month, India's Ministry of Finance approved a proposal by Iranian private lender Bank Pasargad to open a branch in Mumbai. One of the officials told Sputnik that the process has been fast-tracked to grant a license to the bank as soon as possible, so that it could be used to route payments by Indian refiners from November. UCO Bank, which was used to route payments during the last US sanctions on Tehran, is also an option.

Dharmendra Pradhan, India's oil minister, said on Monday that Iran had become the second-largest supplier to India's state-owned oil refiners, replacing Saudi Arabia as the refiners took advantage of steeper discounts offered by Tehran. India's state-owned refiners expanded their oil purchases from Iran between April and June despite the US sanctions on Tehran.