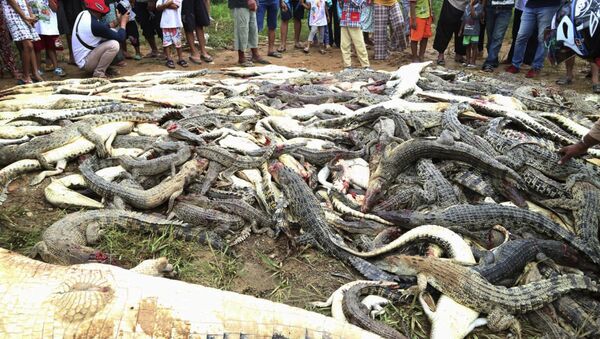 On Saturday, an Indonesian mob slaughtered nearly 300 crocodiles at a crocodile farm with knives, hammers and clubs in an act of revenge after a local man was killed by crocodiles Friday.

According to Basar Manullang, the head of the local Natural Resources and Conservation Agency in Sorong, a coastal city in the eastern Indonesian province of West Papua, 292 crocodiles, from babies to fully grown adults, were killed by dozens of villagers Saturday.

The crocodiles were butchered after the funeral of a 48-year-old man who was killed by crocodiles Friday after walking near the reptiles' breeding pond, USA Today reported Monday. It is unclear how many crocodiles attacked the 31-year-old victim, who went by the name Sugito.

"His family said that Sugito, who worked at a tofu factory, was looking for grass for his cattle when a local resident heard him shouting for help, but… Sugito was found dead," local resident Olga told The Jakarta Post Sunday.

‘'The residents used knives to slaughter the crocodiles," Olga continued. "The crocodiles were caught and dragged outside and stabbed to death. It was so horrid to see."

A photo taken after the incident and circulated on Twitter shows bloody crocodile carcasses heaped in a big pile.

The crocodile farm belongs to Albert Siahaan, a local Sorong resident. According to Manullang, the crocodile farm had an official permit issued by the Indonesian Environment and Forestry Ministry.

"The permit is legal, and the process [to obtain it] in [Indonesia's capital of] Jakarta took a long [time]. There were steps and requirements to meet, and it was under the authority of the local government. The crocodile slaughter is obviously against the law," Manullang told The Jakarta Post Sunday.

Indonesian police officials are currently investigating the incident. It is unclear whether the authorities know who the perpetrators of the attack are.