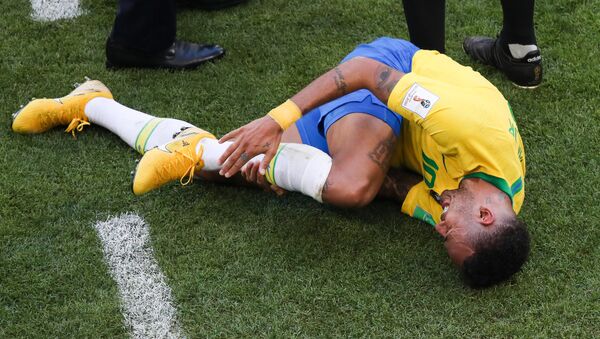 © Sputnik / Vitaliy Timkiv
/
Go to the mediabank
Subscribe
International
India
Africa
A top Brazilian footballer, well known for both his skill and for his theatrical displays of agony on the field, recently starred in a viral ad released by a Portuguese emergency services company.

The Portuguese National Institute of Medical Emergencies (INEM) issued a new warning about false calls, using Brazilian football star Neymar and his recent antics at the FIFA World Cup in Russia as a way to get its point across.

INEM’s latest ad posted on the organization’s Twitter account features Neymar writhing in agony on the ground, with a caption warning that three-quarters of phone calls made to the emergency service company have nothing to do with actual medical emergencies.

​The picture amused many social media users, who retweeted it over 3,800 times.

​Others, however, possibly Brazilian fans, took a dim view of this stunt and retorted with snide remarks about Portugal’s performance during the ongoing FIFA World Cup.

Neymar searches for Portugal and CR7 [Cristiano Ronaldo] in quarterfinals

​No use, they will never be able to make a meme work, sorry.

​The Brazilian national football team was eliminated from the 2018 FIFA World Cup after losing a quarterfinal match to Belgium on July 6.

During his performance at the tournament, Neymar caught the public eye by frequently falling on the ground and writhing in what social media users have perceived as exaggerated agony.

READ MORE: Netizens Ridicule Neymar for Spending a Total of 14 Mins on Ground at World Cup

The Swiss RTS Sports estimated that before the game against Belgium, the Brazilian footballer had already spent some 14 minutes on the ground in the tournament.