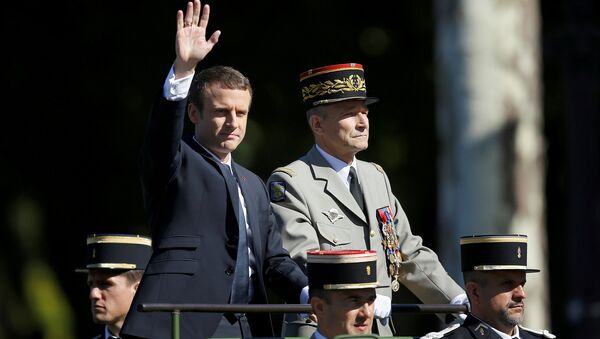 European leaders have hastened to pledge their commitment to the alliance and respond to the US president’s criticism over insufficient military spending and violating the earlier agreed target of 2% of GDP target ahead of the NATO summit in Brussels, threatening to become a stress test for the 50 year old alliance.

French President Emmanuel Macron is to sign an $18.8 billion increase in defense spending on July 13, The Telegraph reports. According to the draft law, France will boost its military spending gradually over the next seven years to meet the NATO’s requirement of 2% of gross domestic product (GDP). However, more than half of this is to be spent after 2022, after Macron’s current term in office.

Germany, another NATO heavyweight and Europe’s largest economy, has also pledged its allegiance to meet the 2% of GDP target just ahead of the upcoming summit of the transatlantic alliance. Chancellor Angela Merkel dedicated her weekly video podcast to the importance of NATO, confirming Germany’s previously articulated intention to spend more on the military. In her address, she pointed out that challenges to NATO have changed drastically over recent years and the organization needs to "focus more on defending the alliance."

"To do that we have to make necessary arrangements, for example through a presence in central and Eastern European countries," she stated, pointing out that the alliance must show a "determination to protect us."

In the beginning of July, Germany’s finance minister presented a budget draft for next year, boosting the country’s military spending by $4.65 billion, up to $50.5 billion. Although, this makes up 1.2% of GDP, both Merkel and Defense Minister Ursula von der Leyen have reiterated Germany’s commitment to boost military spending to 1.5 percent of GDP by 2024.

Although the move has been welcomed within NATO, in his interview with the German newspaper Bild, the organization’s Secretary General Jens Stoltenberg pointed out that this is not enough and that the country needs to do more.

“One and a half per cent is not 2 percent. I welcome the fact that Germany is significantly increasing its defense spending. But I expect Germany to do more,” he said.

Sword of Damocles over NATO Summit

In recent months, the US president’s criticism of the insufficient military spending of NATO allies and their failure to meet the 2% of GDP target have cast a shadow over the alliance, as speculations arose that Donald Trump could pull US troops out from Europe. Tensions have grown ahead of the NATO summit, scheduled for July 11-12 in Brussels, as the US head of state sent letters to the leaders of some NATO states, including Belgium, Canada, Germany and Norway, to express Washington's discontent over the countries' non-compliance with their obligations to increase defense spending.

This and Trump’s plans to meet Russian president Vladimir Putin right after the gathering in Belgium, could make the upcoming summit “the most difficult in years,” according to analysts and officials cited by AFP.

The news outlet reported that the 28 other NATO leaders fear a repeat of last month's G7 summit in Canada, where Trump rejected the closing statement.

"What Trump says will be decisive for the future of the alliance, but we do not know what he will say. It is a shadow that hangs like the sword of Damocles over the summit," a diplomat from a NATO country told the news agency.