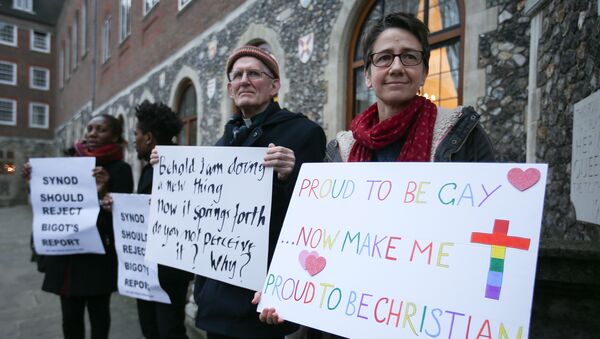 © AFP 2023 / Daniel LEAL-OLIVAS
Subscribe
International
India
Africa
The Church of England’s synod has revealed a bit of inconsistency as it first approved of the UK government’s intention to ban gay conversion therapy nationwide and then took no definite stance on the guidelines of a high-profile church organization.

Hundreds of Anglican churches belong to a group that appears to root for so-called gay conversion therapies being put to practical use, according to a report by The Times.

More specifically, 351 UK churches are members of the influential Evangelical Alliance, which brands unrepentant homosexual activity an offense to be punished through “church discipline.”

Their “resources for church leaders” suggest that churches should essentially invite homosexuals, with one subtle point to be taken into account: churches should expect them “to see the need to be transformed.” The document stipulates that “help” will involve counseling and support to live a “chaste life,” with some ultimately expected to “seek and experience” a different “strength or direction” of their same-sex predisposition.

When the General Synod was asked to comment on the excerpt in the framework of its regular gathering in York on Friday, the Bishop of Newcastle, the Right Rev Christine Hardman, ascertained that members of the Church of England are part of a range of organizations that are free to offer their own guidelines, adding that The House of Bishops hasn’t yet taken a stance on the Evangelical Alliance’s “resources.”

World
Diversity Is Not a Threat: Study Links Low Intelligence to Fear of Gay Lifestyle

Jayne Ozanne, a General Synod member who underwent conversion therapy but has since stood up against it, promptly picked up on the comment, recollecting the synod’s earlier vote to ban conversion therapies, which are sometimes allegedly forcefully imposed on homosexuals by their family and friends.

Nevertheless, according to The Core Issues Trust, which is among those offering such therapies, their services attract people who feel isolated in a sense that their sexual urges appear not in line with their religious beliefs and therefore voluntarily enroll for counseling sessions. The statement generally echoes the stance of the Evangelical Alliance:

"We stand with the government in condemning the rare but deeply troubling accounts of abusive practices. We look forward to the government more clearly defining what abusive practices of conversion therapy means, so the church can continue to offer support and care to people who are LGBT," The Times cited an Evangelical Alliance representative as saying.

The UK government announced the other day that it would ban services that try to “cure” homosexuals to make them straight, which often dwell upon an idea that some life trauma could have caused one to become gay or lesbian. The Anglican Church notably called for the practices to be formally banned last year, this time endorsing the government’s plan.

A limited number of countries have so far outlawed gay conversion practices: these are South American states Argentina and Brazil, as well as Malta, Switzerland (de facto) and two Spanish municipalities in Europe. On the North American continent, conversion therapies are banned in two Canadian provinces and 13 US states, along with DC.