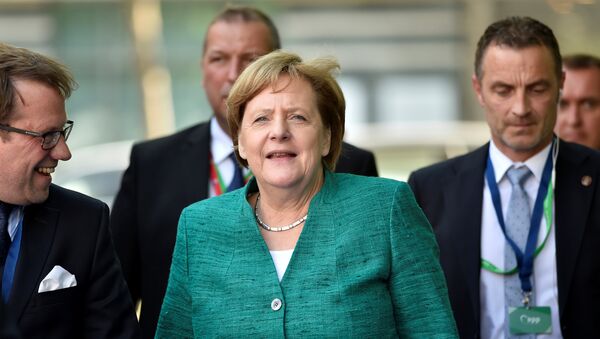 Jon Gaunt
All materials
Italy didn’t even qualify for the World Cup but their hard-line right-winger, Prime Minister Giuseppe Conte, has just scored an epic victory over the Germans and their lead bruiser and defender Angela Merkel after the EU went into extra time overnight to try and sort out the mess of the migration crisis.

Well, that’s one interpretation of what happened in the quarterly summit of EU leaders that lasted until 4.30 this morning!

It looks like they have agreed that Italy will get much more support in handling migrants who land up at their shores and that some EU states will agree to set up "control centers" (isn’t that detention centers like Trump's?) to process migrants.

EU Leaders Agree on Joint Asylum Centers, Restriction of Migrants’ Moves in Bloc
Hard-line states like Hungary, Poland, and the Czech Republic, who wanted migrants to be turned away before they reached Europe’s shores, allegedly now have an agreement to explore the concept of “regional disembarkation platforms” to process migrants in countries like Libya. However, I am so sorry to do the proverbial over their parade but even without a video ref, most people can see there is fat chance that African Countries like Chad and Libya will agree to this mad idea.

Evidently, the meeting was full of bruising tackles and aggressive tactics from the Italians and the East European states and the atmosphere was more toxic and tense than an England Germany match ending in penalties.

So just like Gareth Southgate, after last night’s defeat by Belgium, all of the EU leaders could come off the pitch and claim victory.

But of course, this migration debacle is a game of more than two halves. Plus there are plenty of other teams on the sidelines wanting to put the boot in and as far as I can see Europe still has plenty of gaps in their defense.

Kurz Proposes to Send Migrants Rescued at Sea to States Outside Europe
Fundamentally, last night’s meeting was all about saving the career of the veteran left winger Angela Merkel who, like an aging footballer needs to realize her “best” days are well behind her.

For too long Merkel has acted as if she is the political equivalent of Franz Beckenbauer. He, of course, invented the role of sweeper in football which effectively meant he was a defensive player who intervened proactively in the offensive game of his team. Does that sound familiar, Angela? Of course, he has nicknamed the Kaiser?!

Trump Says US Won't Be 'Migrant Camp'
This modern-day “Kaiser’s” disastrous tactic of letting 1.2 million migrants into the EU without consulting her teammates, the other countries, is the real reason we have the crisis today and why populist parties and leaders are on the rise right across Europe.

Her insane diktat to the rest of the EU countries to open their borders without even having the courtesy of discussing with them the game plan beforehand demonstrated how overwhelmingly powerful and dangerously reckless Germany has become within the EU.

To invite well over a million people of unknown nationality, skills, religious persuasion, and social mores into Germany and the heart of the EU was bad enough but when she then tried to use the EU to dump these mainly economic migrants in vast swathes on unwilling fellow member states. It was an utter disgrace and abuse of the power she wields.

No wonder states like Hungry, Poland and the Czech Republic refused to play ball with the Kaiser and put their own defense at the heart of their game by refusing to take any of these economic migrants. They were right to do so and I doubt whether their defensive wall will ever change despite this sketchy agreement the leaders thrashed out last night. So, she should go but so should we leave now, whilst we can still escape.

Seehofer: Bavarian Conservatives Won't Try to Oust Merkel, Crash Grand Coalition
English fans love whistling the theme tune of the Great Escape during World Cup clashes but Theresa May along with the remainers in her party and across the political spectrum are our own version of the Trojan Horse.

Why are we playing the German game for them and why do we want to play like them?

We should be playing our own game with our own tactics and our own rules. We believe in well-controlled managed immigration, which has served us well for years and we certainly do not believe in the Kaiser’s vision of Europe and that is why we voted to get out.

The weakness at the heart of the EU defense has been clearly identified and the new Italian Government has achieved real results by refusing to play Angela's game and by their aggressive populist approach. We in the UK should take a leaf out of their book and develop a backbone and a belief in our great team and country and get the hell out of the EU and the migrant misery now before the inevitable collapse of Europe.

How about looking at America, where they call football soccer, as one thing’s for sure, Donald Trump knows how to defend his Country, he builds a wall and imposes a travel ban!

The liberal handwringing hypocrisy of EU leaders in their reaction to his hard-line policy on the Mexico border is shown up again in their failure to adequately protect Europe’s people their culture or history.

Now they propose after the ball has landed in the back of the net, to build “control centers” which sound like detention centers to me, maybe Donald will lend them his chicken wire for the “cages”.

Kaiser and her teammates want “regional disembarkation platforms” in Africa but they have no real idea or game plan for how they will persuade the African nations to agree to this.

Inevitably, it will end up with a massive financial bung in the shape of foreign aid to bring this about and of course in the corrupt process help those African leaders to buy another fleet of Mercedes and a private jet.

Immigrant Parents Describe Hardships Under Trump's 'Zero-Tolerance' Policy
Meanwhile, Donald Trump after being so crudely handed a yellow or is it a red card by the likes of Sadiq Khan (who by the way isn’t even fit to clean the Donald boots) over a state visit has decided to have a summit with a leader who really matters, Vladimir Putin.

Trump quite rightly wants Putin in a G8. So now it isn’t just the back four but the whole EU “team” are quaking in their boots with his threats to NATO and a trade war. He is playing hardball and he is correct in doing so as someone needs to whip these European sides into shape.

We in England and the UK need to be playing in a World game, not just a European one. We need to get our boots on, get out of the failing EU and play with the big boys of the USA, Russia, China, Australia, and India.

Let’s rip up the EU rule book and make our own rules as the Kaiser and the EU are finished.