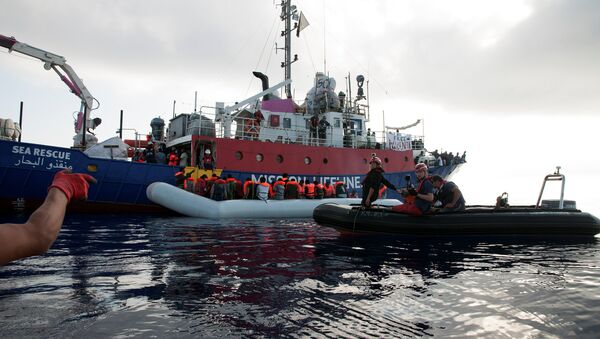 VIENNA (Sputnik) - Austrian Chancellor Sebastian Kurz on Thursday proposed to send migrants rescued at sea to disembark at special "platforms" located outside the European Union before being transferred to third countries.

"I think… we will be able to reach an agreement about the creation of so-called platforms for disembarking migrants. This will result in a situation where people moving to Europe illegally would not be automatically sent to Europe after their rescue, but would be sent to third countries outside Europe," Kurz said, adding that Vienna had been calling for a change to the approach to dealing with the migration crisis for years.

The politician added that the trend could be changed after strengthening the European Border and Coast Guard Agency (Frontex), and enhancing cooperation with the Libyan Coast Guard.

"This will result in a decrease in the number of people arriving in Europe, people will not sink in the Mediterranean Sea and illegal migrant smugglers will go out of business," the chancellor said.

Merkel Says Migration Crisis ‘Make-or-Break’ for EU Ahead of Bloc’s Summit
The European Council started its session in Brussels earlier in the day. According to the council's press service, the agenda of the two-day event includes discussions on migration, security, defense and the economy.

In recent years, the European Union has been facing a large-scale migration crisis. Hundreds of thousands of people, mostly from the Middle East and Northern Africa, move to the stable and wealthy European nations, either fleeing from armed conflicts or looking for a better life.

On Sunday, representatives of 16 EU member states held an informal meeting in Brussels focusing on migration. The ongoing European Council session is expected to discuss the options already considered at the informal Sunday meeting, such as regional arrangements with African countries, among others.