Trump May Meet Putin During July Trip to Europe – Reports 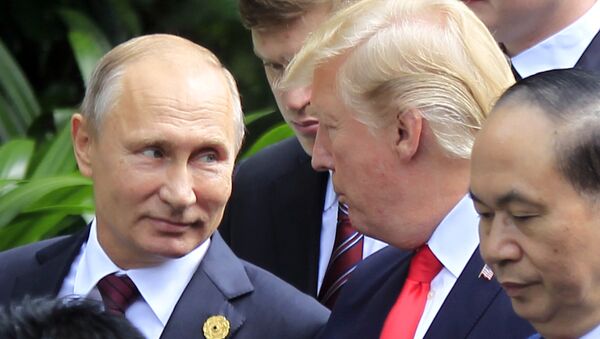 US officials are looking at a July timeframe for US President Donald Trump’s meeting with Russian President Vladimir Putin, British media reported Thursday.

Trump is expected to travel to Brussels for a NATO summit on July 11 and from there on to London. A meeting with Putin may be arranged either before that time or after he wraps up the UK trip, The Times newspaper said, citing senior sources in the British government.

The Austrian capital of Vienna has been discussed as a possible venue, being the headquarters of the Organization for Security and Co-operation in Europe. Russia and the United States are both members.

There are two possibilities at the moment for the meeting and both are either before the NATO summit in Brussels on July 11 or after Trump's visit to Britain on July 13, Bloomberg reported, citing sources familiar with the matter. However, there are no comments from the White House or Kremlin so far confirming or denying the reports.

World
Belgrade Could Host a Putin-Trump Meeting – Serbian FM to Sputnik
Trump hinted at a get-together with President Putin in an interview with Fox News and later suggested this summer as a possible date. Putin’s spokesman Dmitry Peskov denied any knowledge of such an arrangement.

On June 10, Vladimir Putin said his meeting with Trump would take place as soon as the US side is ready for it.

Earlier, Russian Deputy Foreign Minister Sergey Ryabkov said that Moscow focuses on results, not on timing, when it comes to such issues as preparing a summit between Russian President Vladimir Putin and his US counterpart Donald Trump.