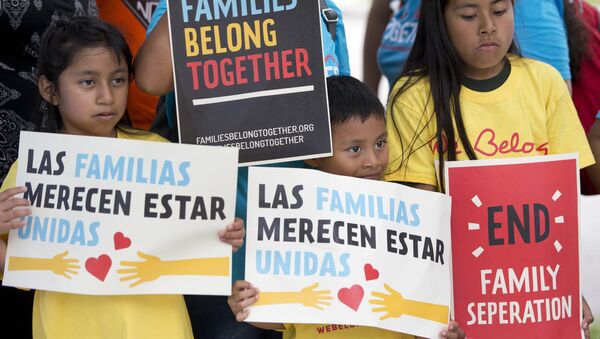 The current US administration has been facing a massive backlash over the recent separation of some 2,000 children from their families at the border, as the latter were deported from America. President Donald Trump launched a Twitter tirade to blame Democrats for having failed to revise laws earlier.

“If you don’t have Borders, you don’t have a Country!” – that’s the latest message to have hit Twitter from Donald Trump, who’s been on the defensive ever since he took a hardline stance on undocumented families crossing the US-Mexico border.

READ MORE: We Should Copy Trump on Migrants

Outrage has even been coming from his fellow Republicans after the Department of Homeland Security unveiled Monday that over the past month, more than 2,300 children were taken from their parents at the southern border, at a rate of about 70 kids per day.

A number of renowned politicians, both Democrats and Republicans, have largely condemned the ongoing heist at the US’ southern border. Some of them have followed the president’s lead and taken to Twitter to express their outrage, including Republican Senator John McCain:

The administration’s current family separation policy is an affront to the decency of the American people, and contrary to principles and values upon which our nation was founded. The administration has the power to rescind this policy. It should do so now.

The US Representative for Michigan’s 6th congressional district, Fred Upton, also posted a barrage of tweets, urging to put an end to “this ugly and inhumane practice.”

It’s time for this ugly and inhumane practice to end. Now.

It’s never acceptable to use kids as bargaining chips in political process. For some time, I’ve said that separating young, innocent children from their parents is the wrong approach. The right approach is legislation to address the root issues.

Senator Susan Collins of Maine has also spoken out against the policy:

(3/3) Second, and much more important, it is inconsistent with our American values to separate these children from their parents unless there is evidence of abuse or another very good reason. We need to fix our immigration laws, but using children is not the answer.

The House of Representatives Democratic Minority Leader Nancy Pelosi, who is an outspoken critic of Trump, has also lambasted the US administration and stated that the current family separation policy leaves a “dark stain on our nation.”

“President Trump’s family separation policy leaves a dark stain on our nation. Ripping vulnerable little children away from their parents is an utter atrocity that debases America’s values and our legacy as a beacon of hope, opportunity and freedom,” she said in a statement, adding that such measures were illegal. “For him to blame Democrats is yet another sign of pathological need to distract and divert attention for his constant trampling over the law.”

Since the adoption of the ”zero tolerance” policy, all those entering the US illegally have been facing immediate detention and prosecution, while all minors, who cannot be put in federal jails under US law, have thus been forcibly separated from their parents and placed in shelters instead.

Trump himself has so far been standing by the choice to come through on his campaign promises and crack down on illegal migration. The US president referred to the ongoing migration crisis in Europe as an example in a bid to swing public opinion, as well as crime rates in Germany, which have been on the rise “since the migrants were let in.”

Crime in Germany is up 10% plus (officials do not want to report these crimes) since migrants were accepted. Others countries are even worse. Be smart America!

Children are being used by some of the worst criminals on earth as a means to enter our country. Has anyone been looking at the Crime taking place south of the border. It is historic, with some countries the most dangerous places in the world. Not going to happen in the U.S.

He yet again called for a change in the current legislation while also taking a swing at the previous “weak” and “ineffective” Democratic administration, questioning their motives for opposing his policies.

It is the Democrats fault for being weak and ineffective with Boarder Security and Crime. Tell them to start thinking about the people devastated by Crime coming from illegal immigration. Change the laws!

Democrats are the problem. They don’t care about crime and want illegal immigrants, no matter how bad they may be, to pour into and infest our Country, like MS-13. They can’t win on their terrible policies, so they view them as potential voters!

#CHANGETHELAWS Now is the best opportunity ever for Congress to change the ridiculous and obsolete laws on immigration. Get it done, always keeping in mind that we must have strong border security.

The Democrats should get together with their Republican counterparts and work something out on Border Security & Safety. Don’t wait until after the election because you are going to lose!

Earlier at the White House, Trump re-pledged his commitment not to allow the US to become a “migrant camp.”

In the meantime, partisan politicians have been gathering behind the ”zero tolerance” initiative as well.

Vocally backing the president, Republican Senator Steve King dismissed any “concentration camps” references towards the detention centers, where the migrant minors are being placed.

“They did set up chain link panels inside to divide people so they could keep boys away from girls. But they also air-conditioned that whole building and they had coaches in there they were playing soccer. […] These are children that are cared for with better care than they get in their home country. They get a warm and a comfortable place to sleep, they get medical care like a lot of kids in this country don’t get, they get three squares a day. They get exercise fresh air,” King said.

Homeland Security Secretary Kirstjen Nielsen also stood by the Trump administration as she claimed that the practice of separating families was not created in 2018:

“We have a long-existing policy multiple administrations have followed that outline when we may take action to protect children: we will separate those who claim to be a parent and child if we cannot determine a familial or custodial relationship exists,” she told a press conference, arguing that children are not being used as a leverage to force Congress to pass immigration reform.

ENOUGH of the misinformation. This Administration did not create a policy of separating families at the border. pic.twitter.com/y0uuYUkSEL

Attorney General Jeff Sessions, who is said to have been the architect of the zero tolerance policy, also urged Congress to take action.

"We do not want to separate parents from their children," he said. "If we build the wall, if we pass legislation to end the lawlessness, we won't face these terrible choices."

And according to Trump’s senior adviser Stephen Miller, the zero-tolerance policy was a “simple decision.”

”No nation can have the policy that whole classes of people are immune from immigration law or enforcement. It was a simple decision by the administration to have a zero tolerance policy for illegal entry, period. The message is that no one is exempt from immigration law,” he told The New York Times.

Republicans to Vote for Legislation to Stop Separation

House Republicans are set to vote on two immigration bills this week, including a hardline version, which will give temporary status to the recipients of the Deferred Action for Childhood Arrivals (DACA) program, make cuts to legal immigration and boost interior enforcement, and a compromise bill, which envisages legal status for the so-called Dreamers, funding for border security, an end to the diversity visa lottery and curbing family-based legal immigration.

US Authorities Split 2,000 Children From Parents During Illegal Border Entries
During his appearance on “Fox & Friends,” the president sent mixed signals about which bill he would support, having sparked chaos on Capitol Hill when he said he would not sign “the more moderate” legislation.

After a day full of confusion, the White House clarified that President Trump backed both immigration bills despite his initial remarks.

Last month, Democrats in both chambers sought to push through legislation to put an end to family separation, with senators signing on to the “Keep Families Together Act,” while two similar bills were introduced in the House – the Help Separated Families Act of 2018 and the HELP Separated Children Act.

It’s All About the Children

Even though unauthorized border crossings have always been illegal, it is the kids that have sparked the ongoing backlash, since the Trump administration has introduced the practice of separating minors from their parents.

Back in 2005, the George W. Bush administration launched Operation Streamline, aimed at prosecuting all illegal immigrants, except for adults with kids. A similar pattern was used by the Obama administration, which did not separate families, detaining them together in Immigration and Customs Enforcement custody instead.

Trump Announces He 'Started the Wall'
The DACA federal program was introduced in 2012 under the Obama administration to provide temporary residency, as well as the right to study and work in America to undocumented migrants brought to the United States illegally as children, also referred to as “Dreamers.”

Notwithstanding, the initial intent to deter the illegal migrants from crossing the US-Mexico border and the adoption of the zero-tolerance policy, the migration influx has remained high.

As border agents reportedly arrested over 50,000 immigrants in May, while over 2,000 children were taken from their parents, President Trump announced the beginning of the construction of a wall on the southern border to halt the migration flow.