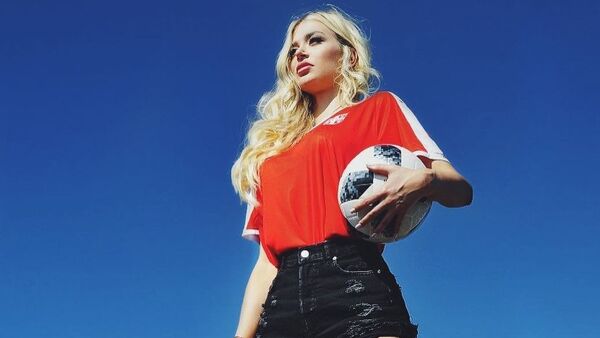 © Photo : sofijamilo/instagram
Subscribe
Aleksandar Kolarov scored an impressive free kick to lead Serbia to a much-desired victory in their first World Cup Group E clash against Costa Rica. However, hot Serbian WAGs appeared to have thrown down the gauntlet prior to the match.

In the run-up to Sunday’s long-anticipated clash, some internationally famous ladies gave their most uplifting support to husbands.

Specifically, Serbian midfielder Adem Ljajić can boast of backing his long-time girlfriend, model Sofija Milosevic, who opted for a visual demonstration of her support on social networks. In a series of photographs, Sofija conjures up an alluring image of an ardent football fan, donning a Serbian football jersey tucked into a pair of revealing black shorts and affectionately holding a ball in her hands.

The bombshell naturally accompanied her post with a couple of supportive words:

If you are not too long,I will wait here for you all my life🎈

Meanwhile, the girlfriend of Marko Grujic, also a Serbian football player, posted a video of herself watching the match with a friend of hers.

On the rival team, Costa Rican WAGs showed no less support, having flown into Russia to cheer on their husbands directly from the stands, including Joel Campbell’s love, Fernanda Mora Brianna, and Cristian Gamboa’s wife, Meli Salazar, among others.

World Cup 2018 is currently in full swing across 12 Russian cities and will last all the way to July 15.