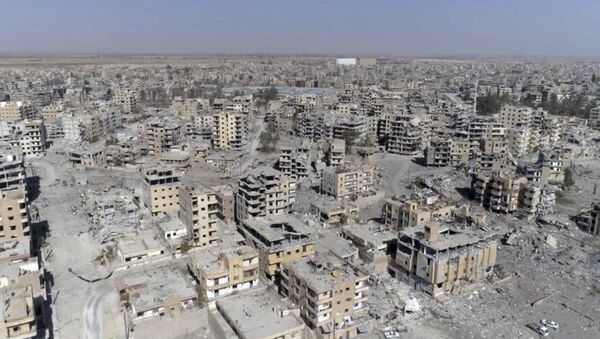 © AP Photo / Gabriel Chaim
Subscribe
It appears that the Pentagon's attempt to keep the record of civilian casualties in Raqqa swept under the rug has failed amid growing criticism from international human rights watchdogs, who insist that the US-led coalition's actions in Syria potentially amounted to a war crime.

While the Pentagon claims that it conducted a precision air campaign in Raqqa, the facts on the ground prove otherwise.

Amnesty International's report, released on June 5, exposed that the US-coalition's four-month military operation to oust Daesh (ISIS/ISIL)* from Raqqa left hundreds of civilians dead, injured many more and left most of the city in ruins.

However, when responding to the human rights watchdog's criticism, the US Department of Defense claimed that "no one will ever know" how many civilians were killed.

"As far as how do we know how many civilians were killed, I am just being honest, no one will ever know. Anyone who claims they will know is lying, and there's no possible way," US Army Col. Thomas Veale, a spokesman for the US-led anti-Daesh coalition, told a Pentagon briefing via video link.

Amnesty Accuses US Raqqa Bombing of Violating Int'l Law
The statement was immediately subjected to harsh criticism from Sarah Leah Whitson, the Middle East and North Africa director for Human Rights Watch: "When the US tells the world it doesn't care enough to track the deaths of civilians it is causing, that's a green light for belligerents around the world to take the exact same attitude," she said as quoted by NBC News.

"I don't understand why they bombed us… Didn't the surveillance planes see that we were civilian families?" asked Rasha Badran, an air strikes survivor, whose 39 family members including a one-year-old girl named Tulip were killed in three separate US coalition strikes.

Popular Uprising Against US-Backed SDF Reported in Raqqa Province
The report tells the story of four families from different parts of Raqqa city who suffered serious losses and injuries during the campaign, which was eloquently called a "war of annihilation" by US Defense Secretary James Mattis.

Stressing that the Coalition's strikes potentially amount to war crimes, Amnesty International has called upon the US-led coalition to "promptly and impartially investigate allegations of international law violations and civilian casualties" and to "provide reparation to the victims and adequate assistance for the desperately needed demining and reconstruction work."

It is not the first time that journalists and human rights organizations have raised the alarm over the US coalition's actions in Syrian airspace and on the ground.

Samuel Oakford, an investigator with a number of US media outlets, bemoaned the fact that the US is "in denial" about civilians it had killed in Raqqa in his op-ed published by Foreign Policy magazine on August 31, 2017.

Citing the findings of monitoring group Airwars, the journalist suggested that 1,700 or more civilians had "likely been killed by US-led air and artillery strikes in Raqqa governorate since March [2017]."

​In general, serious misconduct during the US Raqqa operation has attracted far less attention that the Syrian-Russian liberation of Aleppo from terrorists — November-December 2016 — which was heavily blasted by Western mainstream media outlets. However, the media criticism abruptly ended after the city was liberated by the Syrian Arab Army.

Speaking to Sputnik, Konstantin Truyevtsev, associate professor at the Higher School of Economics, pointed to certain flaws in the US military strategy in Syria.

"The bombing of densely populated cities — what the United States did in Syria — is by no means an effective measure," the Russian academic stressed. "The method chosen by Russia was better, since it [primarily] targeted Daesh oil infrastructure, which is much less destructive."

US-Led Coalition Nearly Annihilated, Not Liberated Syrian Raqqa in 2017 - Moscow
Commenting on the US-led coalition's 2017 Battle of Raqqa, a part of the Raqqa campaign (2016-2017), Russian Foreign Ministry deputy spokesman Artyom Kozhin stressed that instead of liberating the city the US and its allies simply razed it to the ground.

"Most of Raqqa was wiped off the map, while large and yet uncounted part of its population was martyred and buried under the rubble," the diplomat told RT.

The Raqqa campaign, codenamed Operation Wrath of Euphrates was launched by the US-backed Syrian Democratic Forces (SDF) against Daesh in Raqqa Governorate in November 2016 and was officially ended on October 20, 2017. The Battle of Raqqa, the final phase of the operation, took place between June 6 and October 17, 2017 with the assistance of US Air Forces. The US and its coalition members have been operating in Syria since 2014 without the approval of the Syrian government or a mandate from the UN Security Council.

* Daesh (ISIS/ISIL/IS) is a terrorist group banned in Russia.