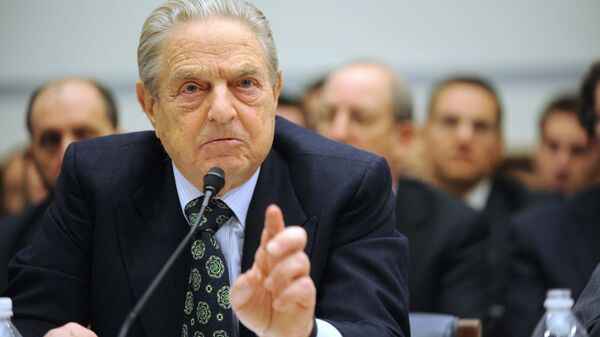 Billionaire globalist George Soros has often been accused of attempting to meddle in the internal affairs, including elections and other democratic processes, of sovereign nations to suit his own political agenda.

Soros’ investment firm, Soros Fund Management LLC, has purchased over $3 million worth of shares in the New York Times, according to recent filings to the US Securities and Exchange Commission (SEC).

Dan Gainor, vice president of business and culture at the Media Research Center, described the move as a “big step” up from his previous endeavors in journalism and the media.

READ MORE: 'Soros is Among Few Individuals in World With His Own Foreign Policy' – Analyst

"Soros has long had influence or given direct funding to a wide range of journalism operations from NPR to ProPublica. This is still a big step to be buying a $3-million stake in the top liberal outlet in America,” he said in an interview.

In 2011, research by Mr. Gainor revealed that Soros had invested at least $48 million in “investigative journalism” and other ventures in the media industry.

George Soros also provides funding to various pro-EU and pro-migration groups via the Open Society Foundation, which he owns. Recent donations include a package of millions of dollars to the anti-Brexit Best for Britain group, to fund its campaign to launch a second referendum to keep the UK in the union.

Hungarian Gov't: Soros Has Employed 2,000 People to Meddle in Our Elections
In addition to giving money to campaigning groups and purchasing shares in media outlets to gain influence, Soros has been accused of attempting to directly meddle in Hungary’s parliamentary elections earlier this year.

A Hungarian official claimed he had hired 2,000 people to do so and called on the electorate to resist Soros’ attempts to make Hungary a “migrant country.”

The government is pushing forward with the so-called “Stop Soros Act” to prevent his pro-migrant organizations from operating in the country.

READ MORE: Analyst Explains Why Time is Running Out for Soros