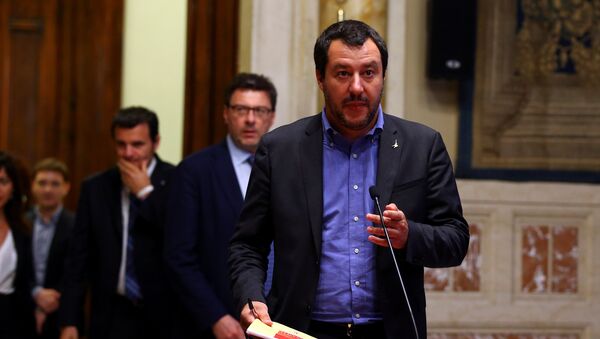 Ekaterina Blinova
All materialsWrite to the author
A political compromise reached by Eurosceptic parties and the Italian president has prevented the country from rolling into crisis, Daniele Pozzati, an Italian journalist and political observer, told Sputnik, shedding light on the future of Russo-Italian relations and George Soros' potential steps towards the new government.

Decades of EU's austerity policies have impoverished Europe's dwindling middle classes, thwarting their purchasing power, and thus their ability to save money, Daniele Pozzati, an Italian journalist and political observer, told Sputnik, commenting on the success of Eurosceptics in Italy.

"At a political level, there is a deep-seated mistrust towards institutions perceived as obscure and unaccountable like the European Commission (EC), or gargantuan and parasitic like the European Parliament," the political observer explained.  "There is the need to give powers back to smaller communities, local, regional, national communities, as opposed to international ones. There is the perceived appeasement towards radical Islam. And there is the NATO-induced — via its 2011 Libyan war — immigration crisis."

The appointment of Giuseppe Conte, who was sworn on June 1 as prime minister, has saved the day for Italy despite gloomy prognoses about a potential protracted political crisis in the country and snap elections.

According to Pozzati, there is more to the current balance of power in the Italian government than meets the eye.

He explained that Conte's appointment is part of a deal struck by the two parties that the new coalition government consist of, the Italy-first, anti-migrant, law-and-order, Lega Nord, and the anti-globalist, welfare-state loving and anti-establishment 5-Star Movement (M5S).

"A deal that included all the new government ministers, none of whom Conte got to choose himself," Pozzati said. "For this reason some, admittedly biased, Italian commentators promptly dismissed Conte as a prime minister devoid of real powers, whose appointment was merely instrumental to the coalition — a Canberra-like PM of a Sidney and Melbourne-like coalition, so to speak. That's a premature judgement."

Italy Aims to Pioneer in Lifting Anti-Russia Sanctions - Lawmaker
The journalist pointed out that both coalition party leaders, Lega Nord's Salvini and M5S's Di Maio, have been appointed to key government positions: Salvini to the Ministry of Interior which heads the police and the secret services; Di Maio to the Ministry of Labor and Social Affairs.

According to Pozzati, "such ministerial appointments were calculated: the interior should enable Salvini to implement his law-and-order, anti-migrant policies; likewise, the Labor ministry would enable Di Maio to deliver on his main electoral promise: a new subsidy for the poor and unemployed."

At the same time, this will leave Conte "enough room for maneuver."

The political observer has drawn attention to the G7 summit, where Conte demonstrated his "ability to charm his potential friends without alienating his likely opponents."

President @realDonaldTrump and the Prime Minister of Italy, @GiuseppeConteIT at the #G7Summit in Canada… pic.twitter.com/lju35Sza7Q

​"If we consider the fine lines Italy's new government will have to thread, between, say, friendship with Trump and negotiations with the EU, between loyalty towards the NATO and distension towards Russia, there is no overestimating the importance of Conte's interpersonal skills," Pozzati emphasized. 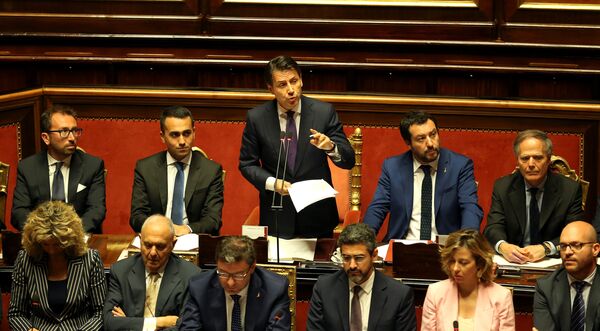 How Salvini, Di Maio 'Won the Day for the New Coalition'

The Italian journalist explained the initial mess in the Italian government in March-April and the subsequent Salvini-Di Maio victory.

The crux of the matter is that "when the Italian President Mattarella tried, over the past weeks, to prevent the formation of the current government, and to appoint yet another technocratic, cuts-loving executive instead, he was obviously overstepping his constitutional mandate," the observer pointed out.

"The Presidente della Repubblica is not supposed to object to the appointment of a minister, let alone of a government, on political grounds. Period," Pozzati underscored. "And the reason Mattarella gave for opposing Paolo Savona's appointment as finance minister was political: with Savona, Mattarella said, Italy might leave the Euro."

Italy Says No to Being EU's 'Refugee Camp' Amid Soros' Calls to Compensate Rome
The Italian journalist presumed that Mattarella probably believed that he could get away with his "soft coup." The Italian president was counting on at last three factors: First, the impracticality of an impeachment procedure against him; second, the complicity of the EU; third, a positive reaction by the financial markets and international media.

Indeed, Mattarella was right on the first two counts, Pozzati remarked: "There were no serious attempts to impeach him, and the EU of course backed him," while "most European media, particularly German media, also applauded his decision."

"But when news of a mounting spread (the differential between German and Italian sovereign bonds) arrived, it became apparent that financial markets saw in the Italian cul-de-sac political mess much worse a threat than a mildly Eurosceptic coalition whose program, after all, did not include leaving the Euro," the journalist elaborated, adding that as a result, Di Maio and Salvini "reached out to [Mattarella] with a save-face cosmetic change in the list of ministers, and won the day for the new coalition."

Commenting on the potential future steps of the new Italian government, Pozzati suggested that "Conte will probably ask Brussels for permission to run a deficit higher than the, admittedly arbitrary, 3 percent limit set by the Maastricht Treaty [of 1992] — just as Spain and Portugal have been able to do, with good results, over the past years."

"The Italian government will need to run a deficit if the two parties comprising the coalition are to deliver, at least in part, on their electoral promises," the political observer presumed. "Lega Nord promised a flat tax rate for businesses. The 5-Star Movement promised a so-called citizens' income for the long time unemployed, many of which live in the traditionally poorer Italian south, and voted for 5SM."

Russo-Italian Relations: Why June 23 Might be the Moment of Truth

As for Italy's relations with Russia, Pozzati suggested to wait until June 23, when the EU meets to decide on the renewal of anti-Russian sanctions.

"That will be the first real test for Italy's new government's pro-Russian credentials," the journalist said. "Let me explain. Last Thursday, the Russian ambassador to Italy had a closed-door meeting, in his Rome residence with now deputy PM Matteo Salvini. Salvini then told reporters he was considering vetoing the extension of anti-Russia sanctions. With Austria taking over the EU rotating presidency as of July 1, the timing for such a veto could not be better."

However, at the same time, NATO's secretary general, Jens Stoltenberg, exerts a certain pressure on Rome, demanding that Italy neither recognize Crimea as part of Russia, nor oppose the extension of anti-Russian sanctions, the journalist highlighted, adding that "Stoltenberg is due to meet with Italy's new government this week." 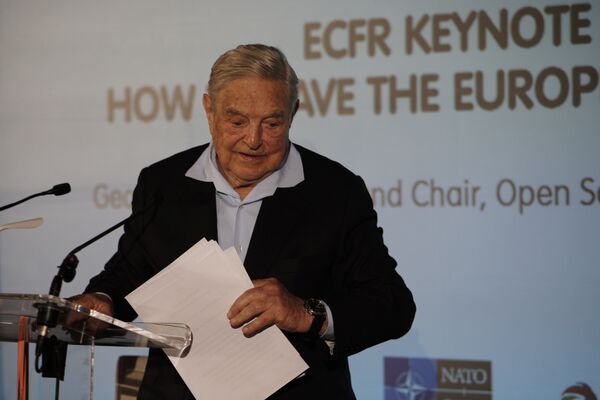 George Soros, Founder and Chairman of the Open Society Foundations leaves after his speech entitled "How to save the European Union" as he attends the European Council On Foreign Relations Annual Council Meeting in Paris, Tuesday, May 29, 2018
© AP Photo / Francois Mori

George Soros, a Hungarian-American investor, business magnate, does not conceal his dissatisfaction with Di Maio and Salvini's win.

The magnate even went so far as to suggest that Salvini could have been funded by the Kremlin. "I do not know if Salvini was funded by Moscow, but the public has a right to know" Soros said.

"Soros's allegations sound like a broken record," Pozzati said, commenting on the matter. "They are frankly boring. Virtually nobody took them seriously in Italy. His words had a scarce echo and almost immediately disappeared from the news."

Covert Lobbying: Spanish Senator Unveils Soros' Influence Network in Europe
On the other hand, "Soros's role in bringing the migration crisis about is well documented," the observer pointed out, "And especially among Salvini's supporters."

"It was an independent blogger who first showed, in 2016, how well-meaning NGOs, some funded by Soros, were not 'saving refugees', as the mainstream media narrative would have it: Such NGOs actually collect migrants off the Libyan coast and ship them to Italy, acting like sea taxis in the process," Pozzati recalled.

Still, the Italian journalist added that "Soros is the ultimate master lobbyist" and that the magnate's "influence over the European Parliament is very real."

"The new Italian government can only expect more obstruction from him, Pozzati concluded.