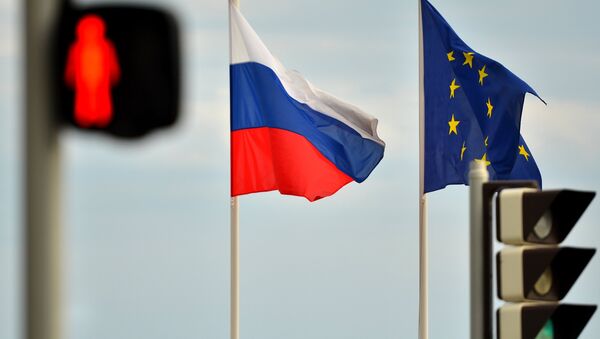 Premier Conte’s speech on abolishing anti-Russian sanctions has triggered an immediate reaction from the EU and NATO. According to Stoltenberg, the Atlantic Alliance secretary, "we must maintain political dialogue with Russia, but the economic sanctions are important."

Kay Bailey Hutchison, the American ambassador to NATO, stated, “We believe that the sanctions must be maintained on Russia.” Most Italian newspapers report these statements without defining interference; it seems that Italians are used to the "advice" that come from overseas, even when they tear with their national interests.

The sanctions issue in Europe is as acute as ever. Italy is not the only country being negatively affected by the sanctions. On the eve of the oncoming Canadian G7 meeting we should wonder whether the Conte government will succeed in lifting sanctions despite warnings from its EU and NATO allies. Sputnik Italia reached out to Stelio Fergola, chief editor of the Oltre la Linea independent portal.

Sputnik: In your opinion, will the Conte government succeed in fulfilling the promised anti-Russian sanctions lifting?

Stelio Fergola: Conte says that they need to "rethink the system of sanctions against Russia," and the next day he says he wants to remain a part of NATO. Italy, as we all know, is a country limited in its actions regarding this issue because of EU membership, but I think what Conte has said is feasible. This can be possible due to a series of recent events on the international scene. Not all European countries comply with the sanctions on Russia.

Italy continues its agricultural, clothing and machinery export to Russia, albeit in a minor tone. If we recall Merkel's March statements concerning the Nord Stream 2 project, we realize that it’s hard for Europe to apply economic sanctions against Moscow. Europe is too dependent from Russia in terms of energy. It’s impossible for Italy alone to abolish sanctions. It is equally true that Europe struggles to pursue these sanctions, a dictate imposed by Washington and not a real European initiative.

Sputnik: What do you think of the NATO and the United States warnings?

Italy Aims to Pioneer in Lifting Anti-Russia Sanctions - Lawmaker
Stelio Fergola: These warnings that sanctions can’t be abolished come not only from NATO. Just after the Italian elections Kurt Volker said that there would be consequences if the sanctions were lifted.

The American reactions are inserted in a very particular international politics context. Not necessarily these reactions will affect the Italian decisions, which still depend on Washington. Now the United States seems to have more special interests in the German issue rather than in Russia.

Americans realize that things can’t remain the same. The United States could probably consider having more hostility towards Germany, while giving support to the Conte government.

Sputnik: Why don’t the newspapers that quote the NATO and the US statements interpret them as interference?

Stelio Fergola: The whole Italian press is completely dominated by the sources that come from the British media. This puts all European media in front of an obvious limit of pluralism.

Sputnik: Russia has returned to the international arena, especially in recent years, the Syrian issue is an example. Did this bother the Americans?

Italy's Decision to Join Anti-Russia Sanctions 'Was a Mistake,' Analyst Says
Stelio Fergola: Absolutely, Russia’s back in the game. But this depends on two fundamental factors. First of all, Putin's great strategic ability, in my opinion he’s the biggest European politician today. On the other hand, we see that the United States doesn’t seem to have a precise recipe for its international ambitions. Trump's election I think makes this trend even more uncertain.

Sputnik: What role will Italy play in relations between Washington and Moscow?

Stelio Fergola: Italy will resume with its typical neutral position.

It’ll maintain good relations with the Atlantic Alliance and at the same time will try to be proactive towards Moscow. Italy is Russia's [second-largest] trading partner; it will be impossible in the long run to see that Russia and Italy don’t get along.

The views and opinions expressed by Stelio Fergola are those of the speaker and do not necessarily reflect Sputnik's position.