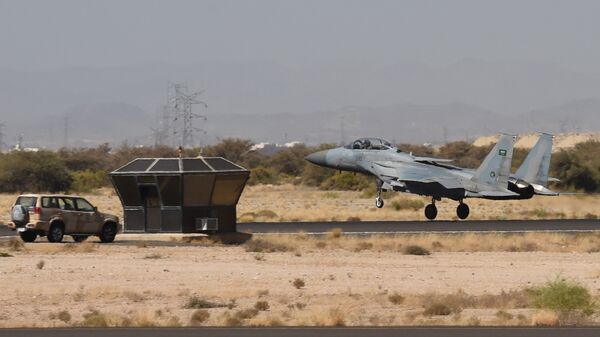 © AFP 2023 / FAYEZ NURELDINE
Subscribe
International
India
Africa
Yemen has been plagued by a multisided conflict since 2015, with Houthi militants battling forces backed by the Saudi-led coalition, and other armed groups, including the notorious Daesh* terror organization and factions from the al-Qaeda franchise.

A new UN peace proposal aimed at deescalating and ultimately ending the raging war in Yemen urges Houthi militants to hand over their arsenal of ballistic missiles – which they have used to target military facilities in Saudi Arabia – in exchange for an end to the Saudi-led aerial bombing campaign, Reuters reported on Wednesday, citing its sources and a draft document.

“[All] heavy and medium weapons including ballistic missiles shall be handed over by non-state military actors in an orderly and planned fashion. No armed groups shall be exempt from disarmament,” a UN draft document seen by the Reuters news agency reads.

A framework for the negotiating process is set to be presented later this month by the UN special envoy for Yemen.

With regard to the proposed transition government, the draft document says all “political components shall be adequately represented,” indicating that the Houthis will be granted at least some level of authority and power in the national government in exchange for disarming and eventually handing over territory under their control.

“The intention is to link security and political aspects starting with a cessation of fighting… then to move towards a withdrawal of forces and the formation of a national unity government. This last objective could possibly be the hardest,” an informed source told Reuters.

Tensions Rise on Yemen's Socotra as UAE Deploys More Troops
Areas under the Houthi’s control include the capital city, Sana’a, and the strategic port city of al-Hodeidah.

Commenting on the UN’s latest effort to winddown the conflict, a Houthi official said, “Our optimism will be determined by how serious and respectful the other parties are of the U.N. role.”

He also described a ceasefire as the “first building block” in achieving a lasting political settlement.

Commenting on the issue, the Emirati Minister of Foreign Affairs Anwar Gargash also expressed support for the initiative.

“Politically, there is a necessity to back the UN effort. It will ultimately mean a transition, to a new political order in Yemen. Clearly with the UN effort, the military and political process will see the Houthis pull out of urban centers,” Minister Gargash told the National newspaper.

The UAE has provided warplanes and logistical support to the Saudi-led coalition, aiding ground forces in countless battles against Houthi militants.

Saudi-Led Strikes on Yemen Presidential Office Kill 15, Injure 55 (PHOTO, VIDEO)
The Saudi-led coalition of mostly Persian Gulf nations has been carrying out airstrikes against the Houthis at the request of the government headed by President Abd Rabbuh Mansur Hadi since March 2015.

Numerous rounds of UN-sponsored talks between Houthi representatives and delegates of Abdrabbuh Mansour Hadi’s Saudi-backed government have been held since the infant years of the crisis, but all have so far failed to yield a feasible compromise and de-escalation effort.