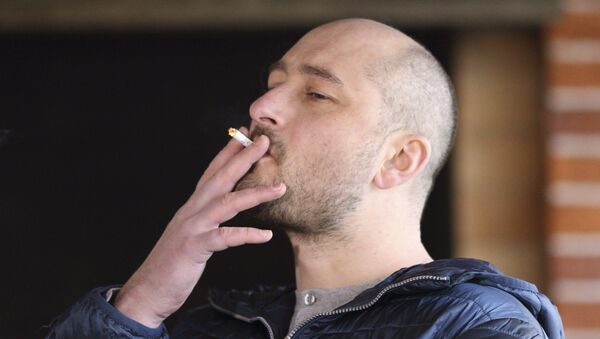 Utter confusion reigned on social media following the news of Russian journalist Arkady Babchenko, who had been reported shot and killed in Ukraine on May 29, actually being alive.

Mr. Babchenko turned up at a news conference on May 30 to the surprise of the international community and media alike. According to Vasily Gritsak, head of the Ukrainian Security Service, the journalist's death was faked to catch those who were trying to kill him.

Reactions poured from social media users, amid the unexpected revelation Babchenko showing at the conference in Kiev.

My reaction to Arkady Babchenko showing up at this press conference alive pic.twitter.com/GrWC3HAtmq

Arkady Babchenko is actually alive, the whole death thing was actually a special operation to catch those plotting to kill him, he says at a press conference. Wow. Only in Ukraine https://t.co/hwvDfGdyJs pic.twitter.com/W1R98JQqSA

Babchenko's wife: He's actually dead now. No, really, I mean it, I just murdered him, you can't say he doesn't deserve it.

Arkady #Babchenko is now in the rather special position of being able to read what people wrote about him after his death.

Arkady Babchenko thanking everyone who mourned his death has me thinking of this awesome Friends episode when no-one shows up at Ross' memorial service pic.twitter.com/zwPKE5pNi5

Reports of Babchenko's death came in on Tuesday, with high profile politicians and the journalist's friends and colleagues reacting to the news of the murder.

During the press conference, Mr. Grytsak told the audience that the "organizer of this crime" was detained in Kiev. He also accused the Russian security services of recruiting a Ukrainian national to kill Mr. Babchenko.

The Russian Foreign Mministry has reacted to the staged death, saying that they were happy Mr. Babchenko had turned out to be alive after all. The Ministry however noted that Ukraine has used his story as propaganda.