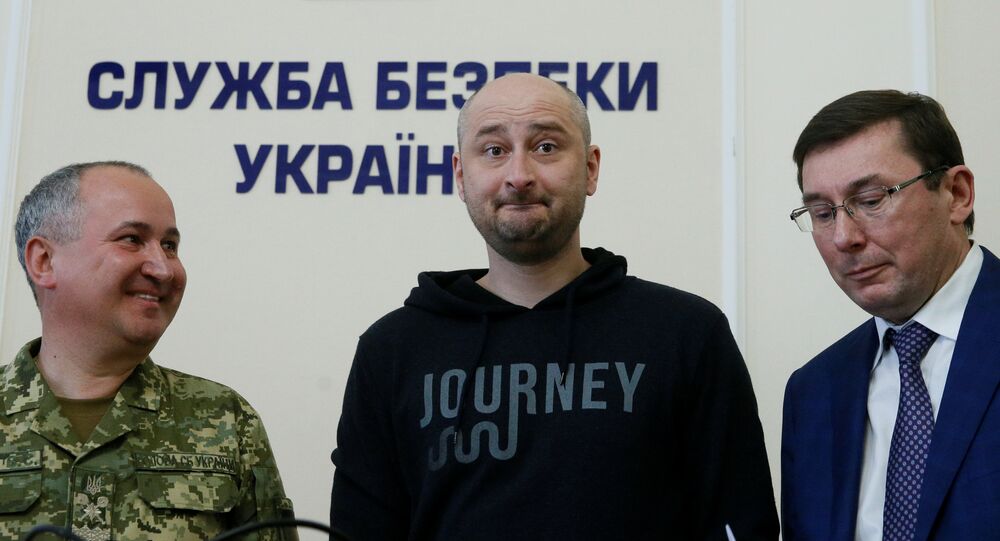 Arkady Babchenko, the Russian national reported to have been murdered in the Ukrainian capital Tuesday night, has appeared at a press briefing in Kiev alive and well.

The head of the Ukrainian Security Service, Vasily Gritsak, told reporters at a news conference Wednesday that Kiev faked Babchenko's murder in an effort to catch those trying to kill him.

Video of the moment Russian journalist Arkady Babchenko 'comes back from the dead' https://t.co/oaxS7nw3XH Via @MetroUK pic.twitter.com/jSjOLWzVJ5

Speaking at the press conference, Babchenko said the operation had been prepared over a two-month period and that he was told about it a month ago.

The journalist thanked the Ukrainian Security Service and apologized to friends and family over the "hell" they went through following his reported death.

Russian Foreign Ministry spokeswoman Maria Zakharova called Babchenko's status "the best news," lamenting that things do not always turn out this way. Zakharova added that the stunt involving the journalist has had an obvious "propaganda function" for Kiev.

© Sputnik / Ruslan Krivobok
Russian Journalist Killed in Kiev - Ukraine's Interior Ministry
At the briefing, Gritsak claimed that the Ukrainian Security Service had information confirming that Babchenko's planned murder was ordered "specifically" by the Russian special services. He also said that a Ukrainian national, now detained, had planned to go to Russia via a third country upon completing the contract. Gritsak added that the detained Ukrainian national's coconspirators consist of former participants of Kiev's ongoing military operation in eastern Ukraine.

On Tuesday night, Ukrainian authorities reported that Babchenko had been shot multiple times in the back outside his apartment and that his wife found him bleeding to death. Kiev immediately accused Moscow of being involved in the journalist's "murder," charges which Russian officials called "the height of cynicism."

Babchenko moved to Kiev from Russia in 2017 after complaining about receiving death threats over his insensitive comments involving the crash of a Russian military jet carrying the renowned Aleksandrov Ensemble to Syria.