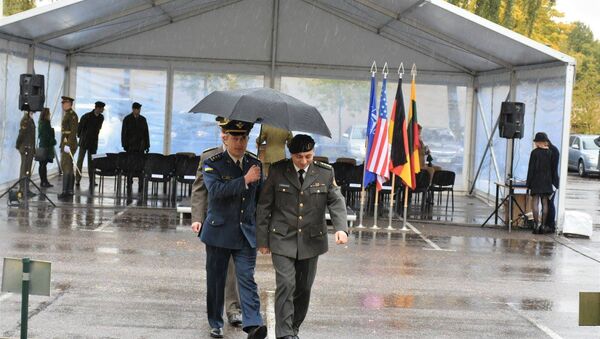 © Photo : NATO Energy Security Centre of Excellence
Subscribe
Academic, journalist and political commentator Gevorg Mirzayan explains why NATO's Eastern flank, as well as the countries of the former Soviet expanse aspiring to join the Western alliance, are being set up have their security and geopolitical ambitions thwarted.

The past week has seen important statements by high-level EU officials on the subject of European defense. On Friday, EU foreign affairs Chief Federica Mogherini declared that the world was in "a state of chaos," with the "European way to peace and security" necessitating "a professional army."

A day earlier, German Chancellor Angela Merkel informed her countrymen and women that Berlin could no longer rely on the US defense umbrella, and would have to "take its destiny into its own hands."

EXCLUSIVE: NATO Arms Dealer Attempted to Buy Russian Weaponry for Iraq in 2015
At the same time, President Trump's dramatic withdrawal from the Iran deal has again spurred discussion at the highest levels on the need for not only a common foreign policy, but a defense policy as well.

According to Gevorg Mirzayan, "the basic message" of such remarks is "all the same," and comes down to the idea that "Europe must be prepared to defend itself by itself, without accounting for America, and as soon as possible."

It's worth recalling, the analyst noted, that the concept of a European army has been discussed since the 1950s, with the idea itself spelled out in the Lisbon Treaty. However, a vigorous and militarily capable NATO, backed by unquestioned American hegemony, meant that the idea would long remain on the drawing board.

"With the arrival of Donald Trump (although not because of him), the situation began to change drastically," Mirzayan noted. "In November 2017, the entire EU, with the exception of Britain, which is in the process of exiting the bloc, Denmark, which chose not to participate, and Malta, whose neutral status is outlined in its constitution, adopted a so-called "Permanent Structured Cooperation on defense and security (PESCO)."

The security project envisions large scale-defense cooperation between EU countries, including the "harmonization" of defense strategies, allocation of military contingents for special operations, readiness to carry out joint missions, and between some countries, projects for common defense infrastructure (such as a European Medical Command and the EUFOR Crisis Response Operation Core project). 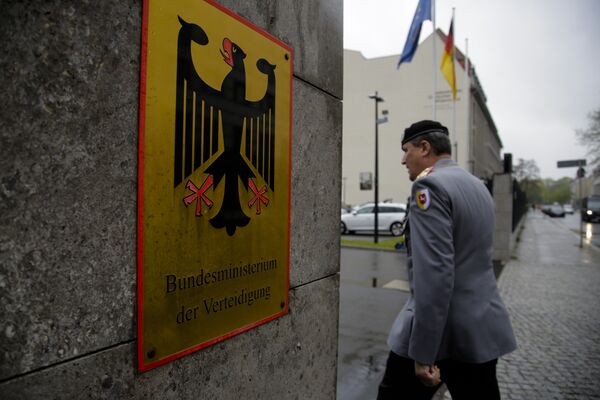 A German forces Bundeswehr officer enters the German Defense Ministry prior to a meeting between Defense Minister Ursula von der Leyen and about 100 top officers in Berlin, Thursday, May 4, 2017.
© AP Photo / Markus Schreiber

US Iran Deal Exit 'Chance for Europe to Once & For All Pursue Own Policy' – Prof
Under Trump, the concept of a European Army is no longer something muttered about quietly in EU leaders' speeches. "National leaders and senior EU-level officials all the way up to European Commission President Jean-Claude Juncker have begun talking about Europe's 'defense sovereignty' as not just a desired goal, but an inevitable prospect," Mirzayan wrote.

Earlier this year, for example, former German Foreign Minister Sigmar Gabriel discussed Europe's need for a common "power project" to allow the continent to avoid the fate of remaining "a vegetarian with a lot of problems in a world of carnivores."

Aftermath of US Adventures

Just as significant, Mirzayan added, was the fact that many of the security issues now facing Europe are the result of 'American victories' in the Middle East. "It's the Europeans who have faced a flood of refugees from the ruins of Syria and Libya. And it's the Europeans who have suffered the brunt of the terrorist attacks by Daesh (ISIS)*, a group which arose out of the US 'victory' in Iraq, over the past decade."

Other problems include the ongoing instability in Ukraine, a more and more anti-Western Turkey, and the Palestinian-Israeli and Iranian-Israeli conflicts, ready to explode at any moment. It's noteworthy, according to the journalist, that the aggravation of all of these conflicts involves US actions. 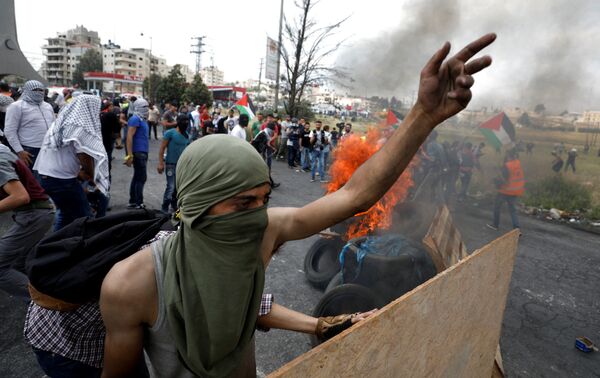 A Palestinian demonstrator gestures during a protest marking the 70th anniversary of Nakba, near the Jewish settlement of Beit El, near Ramallah, in the occupied West Bank May 15, 2018
© REUTERS / Mohamad Torokman

The Europeans have tried to soothe their partners in Washington, emphasizing that PESCO is strictly aimed at being a response to local crises, and that it's a project which won't affect the strategic defense of the continent provided by NATO structures. But the US has already warned that it will only support the European defense project so long as it does not "distract from NATO's activities and requirements," and stressed that Washington would be watching PESCO "carefully" to see that it doesn't "splinter" the US-European alliance.

Germany’s Bavaria Expands Police Authority Amid Increase in Terror-Related Cases
It's noteworthy, according to Mirzayan, that there are a number of key issues related to the European army idea which have yet to be ironed out. "Germany, for example, wants to see the active participation of a maximum number of the EU's member states. However, some members are not only unprepared for such defense integration, but will factually sabotage it. This relates particularly to the Eastern European countries which, while receiving a large portion of the EU's [structural] funds, simultaneously remain strictly oriented toward the US politically." An example of the latter is Poland, which is now in direct conflict with both Brussels and Berlin.

"In any case, the trend is evident. And when the process is brought to its logical conclusion, the main victims will be those countries relying on the outgoing US world order – i.e. the pro-American Eastern Europeans like Poland, and the post-Soviet republics like Georgia and Ukraine looking to come under the NATO umbrella. But by the time they plan to make it in, this umbrella may simply fold up," Mirzayan concluded.

Gevorg Mirzayan is an associate professor at the department of political science at Russian Financial University, and a Rossiya Segodnya contributor. The views and opinions expressed in this article are his own, and do not necessarily reflect those of Sputnik.

000000
Popular comments
ivanwa88, and in the meantime, all future military conflicts and political differences should be settled on the digital battlefield of Fortnite: www.youtube.com/watch?v=UfKmSfgFxi8 If the young persons who skilfully home-crafted this 8-minute epic do not end up working for the big-money CGI and gaming studios, life is truly unfair.

SidewaysObserver
16 May 2018, 14:33 GMT1
000000
Author came to the very point: Easter Europeans are lost in the current political realm. Whether the eiltes there and the masses get the point is very problematic as they historically, always looked for exotic aliances. Time for Europe to split in two sub-clubs. The sooner the better.
Ian Eby
16 May 2018, 16:28 GMT1
000000
Newsfeed
0
New firstOld first
loader
LIVE
Заголовок открываемого материала
Access to the chat has been blocked for violating the rules . You will be able to participate again through:∞. If you do not agree with the blocking, please use the feedback form
The discussion is closed. You can participate in the discussion within 24 hours after the publication of the article.
To participate in the discussion
log in or register
loader
Chats
Заголовок открываемого материала
Worldwide
InternationalEnglishEnglishMundoEspañolSpanish
Europe
DeutschlandDeutschGermanFranceFrançaisFrenchΕλλάδαΕλληνικάGreekItaliaItalianoItalianČeská republikaČeštinaCzechPolskaPolskiPolishСрбиjаСрпскиSerbianLatvijaLatviešuLatvianLietuvaLietuviųLithuanianMoldovaMoldoveneascăMoldavianБеларусьБеларускiBelarusian
Transcaucasia
ԱրմենիաՀայերենArmenianАҧсныАҧсышәалаAbkhazХуссар ИрыстонИронауОssetianსაქართველოქართულიGeorgianAzərbaycanАzərbaycancaAzerbaijani
Middle East
Sputnik عربيArabicArabicTürkiyeTürkçeTurkishSputnik ایرانPersianPersianSputnik افغانستانDariDari
Central Asia
ҚазақстанҚазақ тіліKazakhКыргызстанКыргызчаKyrgyzOʻzbekistonЎзбекчаUzbekТоҷикистонТоҷикӣTajik
East & Southeast Asia
Việt NamTiếng ViệtVietnamese日本日本語Japanese俄罗斯卫星通讯社中文（简体）Chinese (simplified)俄罗斯卫星通讯社中文（繁体）Chinese (traditional)
South America
BrasilPortuguêsPortuguese
NewsfeedBreaking
04:36 GMTTrump's Georgia Rally: How Could 'Election Fraud' Card Play Out for Republicans in 2022 Midterms?
04:12 GMTNorth Korea's KCNA Labels US 'Most Heinous Human Rights Abuser'
03:00 GMTRome Says G20 Summit on Afghanistan Expected in Coming Weeks
02:51 GMTGermany's Social Democrats Win Election After Gaining 25.7% of Votes, Election Commission Reveals
02:24 GMTMerkel's District in Mecklenburg-Western Pomerania Falls Into SPD's Hands
02:17 GMTTexas Gov. Abbott Vows to Employ US Border Patrol Agents Whose Jobs Are 'At Risk' by Biden Admin
02:05 GMT'You F'd Up Your Presidency': Graham Reportedly Blasted Trump After He Refused to Concede Election
01:31 GMTRussian Embassy Calls on US Authorities to Ensure That Yaroshenko Gets Medical Assistance
00:57 GMTIAEA Claims Iran Failed to Fully Honor Agreement on Nuclear Monitoring Equipment
00:18 GMTYouTube Head Expects to Continue Work in Russia Despite Disagreements With Authorities
YesterdaySeoul Calls on Pyongyang to Restore Communication Lines Ahead of Possible Talks
YesterdayEuropean Commission Vice President Congratulates SPD With Strong Social Democratic Result
YesterdayAlternative for Germany to Continue Supporting Nord Stream 2 After Election - Co-Chairman
YesterdayMilitants in Aleppo Tried to Force Way From Turkish-Controlled Area - Russian Military
YesterdayGermans See No Use to Vote for CDU Without Merkel at Helm - Afd Politician
YesterdayGerman Conservatives Suffer Catastrophic Defeat in General Election – Senior Official
YesterdayGermany's FDP Leader Hints at Coalition Talks With Greens
YesterdayMacron Files Complaint Against Paparazzi for Invasion of Privacy - Reports
YesterdayTwitter Removes Blue Verified Badge From Accounts of Several Afghan Ministries - Reports
YesterdayLaschet, Scholz Want Coalition Talks to End by Christmas