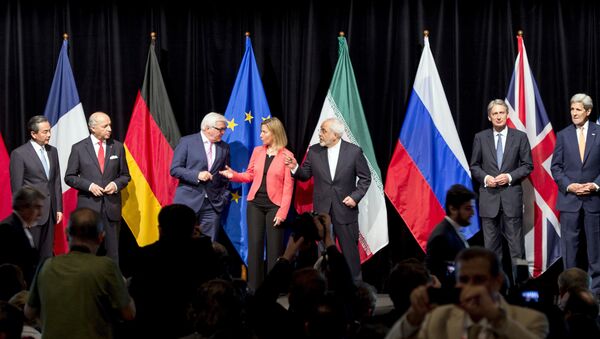 As US President Donald Trump prepares to deliver his verdict on the nuclear deal with Iran and decide whether he will impose new sanctions against the country, it might be worthwhile to recap some facts related to the agreement and the world powers involved in this situation.

Even though the current US leader apparently takes a dim view of this deal, his predecessor Barack Obama, who helped broker the agreement, portrayed it as a historic diplomatic achievement for the United States.

"If 99% of the world community and the majority of nuclear experts look at this thing and they say this will prevent Iran from getting a nuclear bomb, and you are arguing either that it does not or that even if it does, it's temporary then you should have some alternative," Obama said in 2015 as quoted by BBC, addressing the critics of the JCPOA.

His optimism was shared by Iranian President Hassan Rouhani, who described the deal as “a legal, technical and political victory for Iran" which will ensure that the country "won't be called a world threat anymore."

Kerry Met With Iran’s Zarif, EU Officials to Salvage Nuclear Pact – Reports
While Donald Trump has repeatedly criticized the nuclear deal, calling it "the worst deal ever" and threatening to withdraw from it on several occasions, his European allies don’t seem as keen to scrap the agreement.

French President Emmanuel Macron, representing one of the P5+1 countries that helped broker the agreement in the first place, told media that potential US withdrawal from the 2015 Iran nuclear deal is fraught with the most negative scenarios and is hardly something to look forward to.

During his visit to Washington, Macron also tried to dissuade Trump from this move, his concerns were echoed by other P5+1 countries’ leaders like German Chancellor Angela Merkel.

In an exclusive interview with the BBC, UN Secretary General Antonio Guterres also warned that if Washington walks away from the nuclear deal with Iran, there is a real risk of war.

This discovery, he claimed, proves that Iran violated its commitment to maintaining a peaceful nuclear program.

Commenting on this development, US Secretary of State Mike Pompeo said that the data obtained by Israel appears authentic, and alleged that Iran’s actions violate the existing international accords.

The International Atomic Energy Agency (IAEA), however, issued a statement, saying that its Final Assessment on past and present outstanding issues regarding Iran’s nuclear program, presented to the organization’s board of governors in December 2015, "had no credible indications of activities in Iran relevant to the development of a nuclear explosive device after 2009," and that any Iranian activities "relevant to the development of a nuclear explosive" prior to 2003 "did not advance beyond feasibility and scientific studies, and the acquisition of certain relevant technical competences and capabilities."

Iranian Foreign Minister Javad Zarif also tweeted that Netanyahu is merely digging up "old allegations," and that the timing of Israeli leader’s actions was rather "convenient" considering Trump's impending decision on the nuclear issue.

​Regime Change in US Sights

Former US Army Colonel and State Department official Ann Wright warned that the US policy towards Iran and North Korea has been one of "regime change," and that the possible scrapping of the nuclear deal with Tehran may be a part of this approach.

"I don't think that there's much that the government of Iran can do to get out" of the US regime change policies, Wright said, "particularly, the revolutionary government that's there."

The Deal of Discord

The Joint Comprehensive Plan of Action (JCPOA), commonly known as Iran Nuclear Deal, was signed in 2015 between Iran and the so called P5+1 group, consisting of the five permanent UN Security Council Members (Russia, China, France, United Kingdom and the United States) and Germany.

Under the deal’s auspices, Iran agreed to significantly decrease its enrichment activities, to eliminate a large portion of its enriched uranium stockpile and to provide IAEA with regular access to all Iranian nuclear facilities.