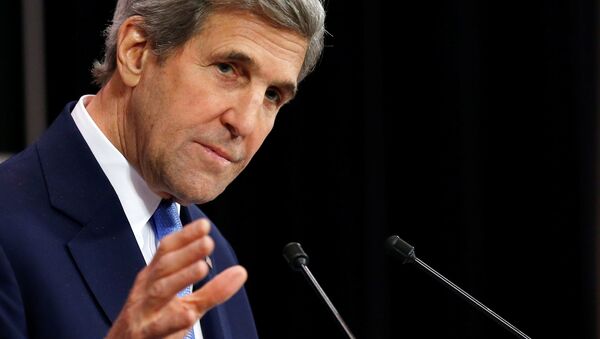 MOSCOW (Sputnik) - US former State Secretary John Kerry met with his Iranian counterpart, Javad Zarif, and EU officials in the past months in a bid to rescue the nuclear deal he helped negotiate, media reported.

An unnamed official told the Boston Globe newspaper Kerry had at least two meetings with the top Iranian diplomat at the United Nations in the past two months.

Netanyahu’s Speech Looking to Push Trump Into Showdown With Iran, Experts Say
Kerry has also been in talks – in person and by phone – with the German and French presidents, as well as EU foreign policy chief Federica Mogherini.

The 2015 Joint Comprehensive Plan of Action (JCPOA), also dubbed as Iran Nuclear Deal, which removed some of the sanctions on Iran in return for Tehran limiting its nuclear activities, was reached by the so-called P5+1 group — Russia, the United States, China, France, the United Kingdom, Germany — and the European Union.

US President Donald Trump criticized the deal fiercely and repeatedly during his 2016 election campaign, saying the European Union needed to fix major flaws in it. He faces the May 12 deadline to waive sanctions on Iran under the agreement.