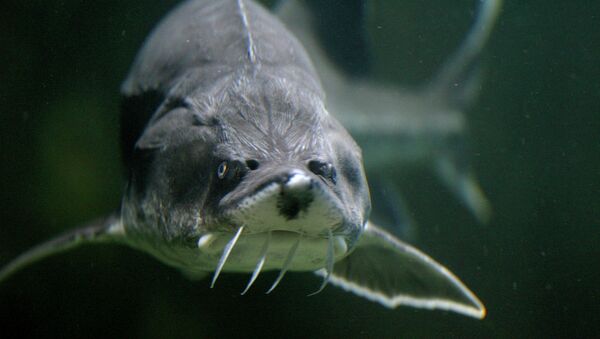 © AP Photo / Nicolae Dumitrache
Subscribe
International
India
Africa
Thanks to a brief stop-over in the onshore sand dunes, a woman was fortunate to discover a "living fossil."

Stephanie Hall discovered the body of a bizarre-looking lizard-like creature in Island Beach State Park, New Jersey on May 4, The Daily Star reported. However odd it may seem at first sight, the lady though it was cool enough to take a number of pictures to be later posted on her hometown webpage.

"And here we are now," Ms Hall concluded. She said local fishermen reacted to the pictures straight away, assuming the sea animal might be a sturgeon, a species that reportedly lived throughout the Triassic period, roughly 245 million years ago.

The creatures, which reached approximately 14 feet in length and lived up to 60 years are universally considered incredibly rare.

"They really are unique creatures, almost like relics of the age of dinosaurs. We focus a lot of monitoring efforts on sturgeon in Delaware Bay, where both species were once prolific," Larry Hanja of The New Jersey Department of Environmental Protection said, adding that the likeliest candidates, the Atlantic and the shortnose sturgeon, are both endangered.

Most interestingly, the fossil record of the sea creatures show little evolution from prehistoric times, namely the Upper Cretaceous period, which saw the extinction of the dinosaurs 65 million years ago. This tiny fact has earned the sturgeon the unique status of being a "living fossil."