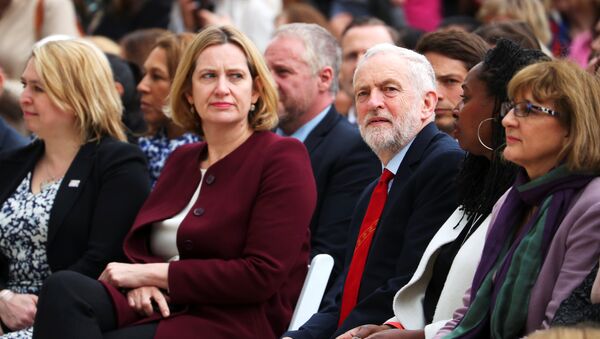 The official explained the move as Labour’s attempt to distract public from the anti-Semitism allegations against it.

"In a desperate desire to pin responsibility on the Home Secretary, in a particularly narrow fashion, Labour is attempting to weaponize this. I think that is quite wrong," Gove said in an interview with BBC Radio 4's Today.

Gove stressed that the secretary had not seen the memo in question and suggested that there was a series of leaks that contributed to Labour's partisan campaign.

Labour on Course for Best Performance in Local Elections in 40 Years - Poll
Earlier this week, a June 2017 memo penned by the Home Office’s Immigration Enforcement division was leaked to The Guardian newspaper, casting light on the government’s goal to expel 12,800 immigrants in 2017-2018.

Rudd told parliament on Wednesday that there were no deportation targets in the United Kingdom. On Thursday, however, she was forced to backtrack on her remarks when information about the existence of these targets was leaked to the public.

On Thursday, UK Labour Party urged the secretary to resign over ill-treatment of people belonging to the so-called Windrush generation, who arrived in the United Kingdom from the Caribbean under free movement policies between the 1940s and 1970s.

The day after, Rudd apologized for not being aware of her department’s migrant removal targets and promised to answer questions in parliament next Monday. But she rejected calls to step down, saying that she would work to ensure that "our immigration policy is fair and humane."