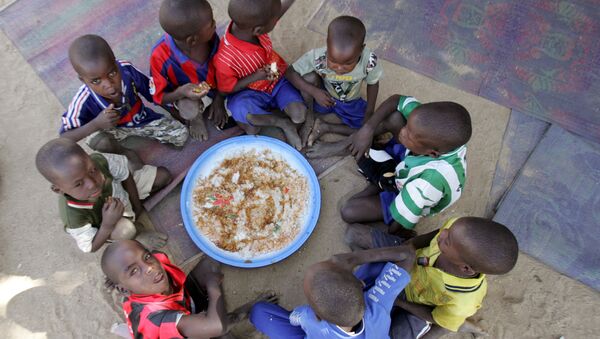 © AFP 2022 / KARIM SAHIB
Subscribe
Anti-trafficking campaigners from Commonwealth countries are calling for so-called orphanage tourism to be considered a form of slavery following the demand from do-gooding tourists wanting to help children in other countries.

During an event at the Commonwealth Heads of Government Meeting in London, Australian Senator Linda Reynolds said the phenomenon of orphanage tourism was a scam fit for the 21st century where people get a "sugar rush" from doing good and sharing their experience on social media; it even has it's own hashtag #voluntourism.

"We have created the problem for the region, so now we have to work with other countries to fix it," Linda Reynolds told Thomson Reuters Foundation.

My message this week at #CHOGM2018 has been — don't close your hearts, but volunteer and donate overseas with more care. After 3 days of nonstop speeches, meetings, briefings and interviews our momentum on stopping orphanage tourism and trafficking is unstoppable! pic.twitter.com/cvtAv9ekBg

Australian foreign minister Julie Bishop called the situation in which volunteers paying thousands of dollars are "unwittingly taking part in human trafficking" is a "scourge."

"Our volunteers — many young people and students — are unwittingly taking part in human trafficking…paying up to US$1,554 to do so," Julie Bishop said.

"Voluntourism trips are often designed to benefit the visitor, rather than the host communities." A great explanation of how #voluntourism can harm, and why orphanages should never be tourist destinations. #CHOGM2018 https://t.co/0YFM2OYTn4

"Kids are given up by their families and become tourist attractions, we don't want to add to the misery of children in the region," Julie Bishop said.

FM Julie Bishop at Australia House speaking at an event for Lumos. (The charity of @jk_rowling) pic.twitter.com/wG3xnLe1vi

Lumos, an international organization founded by Harry Potter author, J.K. Rowling says at least eight million children live in orphanages around the world but four children in five have at least one parent.

New statement from @ComSecYouth at #CHOGM2018, calling on @commonwealthsec countries to transform care systems and recognise the millions of children hidden behind the walls of institutions and orphanages around the world. @HopeandHomes @Commonwealth18 @T_A_Africa @PScotlandCSGpic.twitter.com/9Mj7fxsw7f

READ MORE: Hipster Safari: Where People Pay to Run Around the Poorest Parts of London

Cambodia, in Southeast Asia is witnessing an increase in the number of orphanages tempting tourists, religious groups or gap year students to pay money or volunteer at the institution to help the children — however most of the youngsters have at least one parent.

Research suggests putting children in institutional care is more damaging to a child than remaining with a family. There are also reports that children in badly run orphanages are abused, forced to work without pay, perform for tourists and are at increased risk from predatory paedophiles.

"They were intentionally malnourished to increase the severity of the situation, in order to motivate visiting volunteers to donate more." An ex-volunteer reveals the true cost of orphanage #voluntourism: https://t.co/NwvYE4ScgR pic.twitter.com/8mDRUKKhWU

According to a survey released in April 2017 by the Cambodian government and the United Nations children's fund (UNICEF) 16,500 children are living in 406 care institutions in Cambodia.

James Sutherland, Friend's International's Cambodian communications coordinator told Guardian Australia that the numbers of orphans increasing is at odds with the country's falling poverty rate between 2005 and 2015.

“Children aren’t tourist attractions and they don’t require volunteers to help them out.” (Andrea Nave) https://t.co/gZ7c5fQ1YF

"Coincidentally that was a period of real growth in tourism as well, and in 'voluntrouism' — combining holidays with humanitarian work," James Sutherland said.

"So essentially what's happened is that unscrupulous directors of institutions have seen a business opportunity, James Sutherland said in an interview with Australia Guardian.

Please retweet! #Voluntourism with children is not good practice! https://t.co/191oJadixQ

Australia is expected to pass new anti-slavery laws later this year, it's hoped orphan tourism will be included. Around 40 million people are victims of modern slavery around the world, according to the Global Slavery Index; one in four victims are children.

'Around the world, an estimated 8 million children are living in orphanages, despite the fact that 80% of these children are not orphans.' Orphanage trafficking is a big issue, read more in this blog by @lumos. https://t.co/5ZVr3kG38n

At the Commonwealth Heads of Government meetings in London, a further eight countries have already joined the global 'Call to Action to end Forced Labour, Modern Slavery and Human Trafficking'. Britain's Home Secretary has pledged US$7.8 million to help fight and eradicate human trafficking and child exploitation in the Commonwealth.