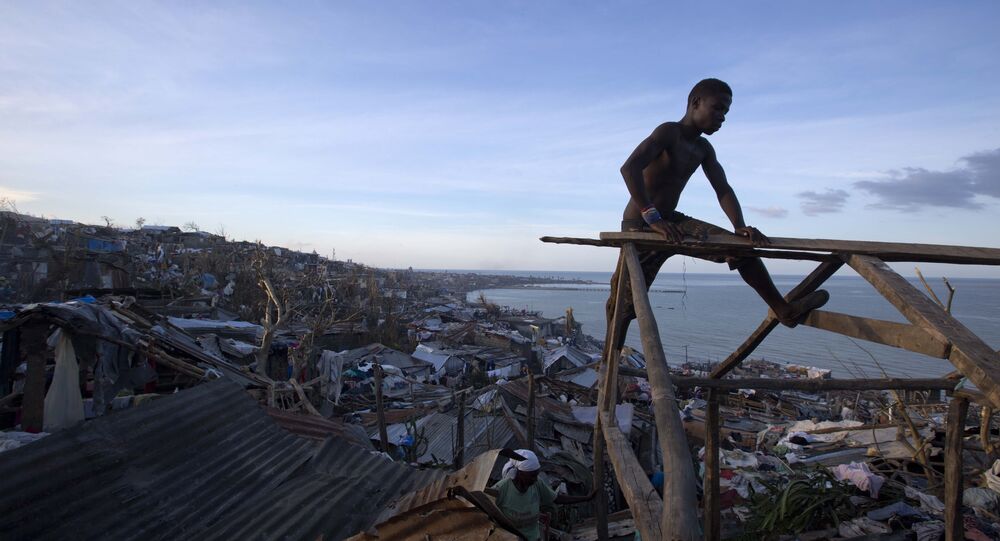 The man at the center of the Oxfam sex scandal has spoken out and dismissed accusations he held parties with prostitutes as "lies and exaggerations", while victims of sexual abuse by aid workers remain silent.

"Where is the victim's voice in all these cases? Chloe Setter, head of policy at charity ECPAT UK asks in an interview with Sputnik.

"What support have they received, have they had the opportunity to speak out? So far the focus has been on the organization and the people involved in the scandal but what about those who may have been abused who are left there?"

The allegations involving Oxfam concern the behavior of a group of male aid workers living in the crisis hit country following the earthquake which killed 220,000 in 2010. The charity's former director Roland Van Hauwermeiren is accused of hiring prostitutes while he worked in Haiti.

"Not that I deny everything. There are things that are correctly described. But I also read a lot of lies and exaggerations," Mr. Van Hauwermeiren told Belgian newspaper Standaard. "A lot of people — even in the international media — will be blushing when they hear my version of the facts," he added.

Oxfam, one of the UK's largest and well known charities, has confirmed several members of staff had been dismissed or resigned following an internal investigation into sexual misconduct in Haiti. However this latest sex scandal involving Oxfam is not an isolated issue, Chloe Setter predicts more cases of abuse involving aid agencies will emerge.

"It's easier to hide where systems are in chaos and regulations are lacking, it's easier for potential perpetrators to stay under the radar," Setter told Sputnik. "Unfortunately, I think there will be a bigger fall out, it's likely not to be limited to a few organizations, she told Sputnik.

"Like the abuse exposed in the Catholic Church, in sport, the entertainment industry, the aid sector has now been exposed, where up until now it has been well hidden because of the context in which it takes place."

"There is an unsettling power imbalance between aid agencies when people are dependent on an organization for food and sustenance. Abuse is as much about power as it is sexual gratification," Setter told Sputnik.

ECPAT, the UK's leading charity on fighting child exploitation and slavery is all too familiar with the widespread abuse of young people in countries all over the world.

"The targeting of children by individuals is happening on a wider scale, it's an issue we've known about for a long time but is often overlooked," Chloe Setter from the charity told Sputnik who suggests there is less focus on the abuse because it takes place outside the nation's territory in other countries where there is less accountability and less scrutiny.

"We know that offenders deliberately seek employment in roles with children, often volunteering or setting up orphanages using funding from Western donors as a front for sexual exploitation."

Mr. Van Hauwermeiren is also accused of using prostitutes while working for British health charity Merlin in Liberia from 2002 and 2004.

"Many people who wouldn't consider themselves as sexual predators often end up offending in places where there is a high degree of anonymity and weak child protection systems or where the exploitation of children on the street or in private houses is," Setter explains. "All this increases the likelihood of offenders thinking they can get away with it."

The UN does not tolerate or condone sexual exploitation nor abuse. Here is how the UN is working to make zero tolerance a reality: https://t.co/G3A62cmaC8 pic.twitter.com/FhWMZdassr

Oxfam, one of the UK's largest and well known charities, has confirmed several members of staff had been dismissed or resigned following an internal investigation into sexual misconduct in Haiti.

In the wake of #OxfamScandal I hope we now look at the sexual abuse committed by UN peace keepers in Somalia and Kenya. Women and girls are being let down daily by those who are meant to be safeguarding their rights.