BZ vs. A-234: How Russia Exposed the Lie of UK Gov't, Ripped British Version Up 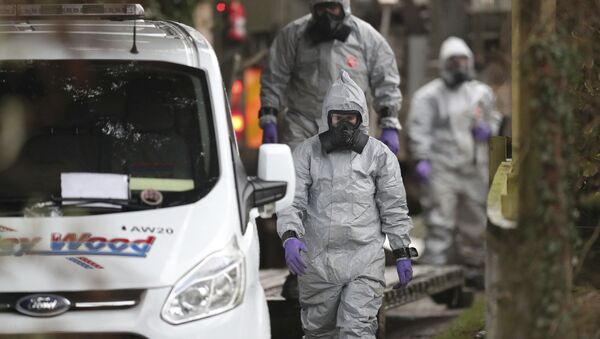 The use of military chemical agent "BZ" and its precursors in the poisoning of former spy Sergei Skripal and his daughter Yulia recently revealed by a Swiss-based Spiez Laboratory is being deliberately neglected by reputable international institutions.

Foreign Minister Sergei Lavrov's notion about the discovery made by Spiez Laboratory, the Swiss Federal Institute for NBC-Protection, has cast doubt on the Western version of Sergei and Yulia Skripal's poisoning.

"Based on the results of the examination, traces of the toxic chemical BZ and its precursors, related to chemical weapons of the second category in accordance with the Convention on the Prohibition of Chemical Weapons, were found in the samples," Russian Foreign Minister Sergei Lavrov announced on April 14, citing the Swiss laboratory's data.

The BZ agent, also known 3-Quinuclidinyl benzilate, is an odorless military incapacitating agent, which was created by Swiss pharmaceutical company Hoffman-LaRoche in 1951 and later used in the armed forces of the US, Britain and other NATO member states. More importantly, BZ has never been produced in the Russian Federation or on the territory of the USSR.

However, the Organization for the Prohibition of Chemical Weapons (OPCW) has not made a single reference to the Spiez Laboratory's discovery.

Less than two weeks ago it turned out that the UK Foreign Office and personally Secretary of State for Foreign and Commonwealth Affairs Boris Johnson lied when they tweeted on March 22, 2018, that "analysis by world-leading experts at the Defense Science and Technology Laboratory at Porton Down made clear that this was a military-grade Novichok [A-234] nerve agent produced in Russia." Before the tweet was deleted by the Foreign Office it was shared 1,600 and "liked" 1,900 times.

On April 3, Porton Down laboratory analysts admitted that they were unable to verify the source of the A234 nerve agent allegedly used to poison former spy Skripal. Furthermore, the laboratory tweeted that "it had never been" its responsibility "to confirm the source of the agent."

Sputnik contributor Irina Alksnis underscores in her op-ed that while many were confused by the fact that the British authorities openly lied while informing the public about the Skripal case, the OPCW's maneuvers appears to be more inexplicable.

"The world has inherited from the Cold War era a system of international organizations which by their nature were designed to maintain balance and stability," the journalist noted. "They were based on the principles of independence and objectivity, since it was the only way the two sides that didn't trust each other could rely of their judgments and decisions."

Agent BZ: Top Five Things to Know About New Chemical Found in Skripal Sample
Although this system has existed nearly 30 years since the collapse of the USSR and the end of the Cold War, it appears that it is collapsing before the public's very eyes, Alksnis remarked, citing the International Olympic Committee (IOC) decision to suspend Russian athletes acquitted by the Court of Arbitration for Sport (CAS) from the 2018 Winter Games.

Similarly, the United Nations' "inability" to condemn sheer aggression on the part of the US-led coalition that attacked Syria on April 13 over an alleged use of chemical weapons in Douma, Eastern Ghouta, raises questions. Earlier, US Secretary of Defense Jim Mattis admitted that the US had no solid evidence that the supposed chemical attack was carried out by the Syrian Arab Army (SAA).

"Perhaps, the most ironic thing is that all these 'suicidal' steps made by the most respected and influential international organizations for the sake of the global hegemon [the US] come at a moment when the hegemon's dominance is falling apart at the seams before the eyes of the whole world," the journalist pointed out.

Russian Embassy in UK Doubts OPCW Skripal Probe as Swiss Lab Cites BZ Agent
According to the April 12 OPCW report, the "pure" A-234 military-grade nerve agent was used to target Sergei Skripal, 66, and his daughter Yulia 33, in an alleged chemical attack in early March 2018 when the two were found unconscious on a bench in Salisbury, England. The incident led to a large-scale diplomatic row, which resulted in the expulsion of more than 100 Russian diplomats over groundless allegations of Moscow having had a hand in the attack.

Speaking to Sputnik, Leonid Rink, one of the A234 creators, explained the main flaw in the OPCW report: "OPCW data saying that a toxic chemical of high purity was used proves that it was not Novichok…. Novichok is a complex nerve-paralyzing substance consisting of a mixture of many different components and additives that decompose in different ways. If a pure substance was found, it could not be Novichok," the specialist said.

Commenting on the recent Spiez Laboratory findings, the Russian Embassy in Britain specified that traces of a toxic chemical called "BZ" and its precursors were found.

Truth Lost in London Fog: Top Three Strange New Details in the Skripal Case
Additionally, Spiez Laboratory specialists mentioned a "strong concentration of traces of the nerve agent of A-234 type in its initial states as well as its decomposition products." However, such a concentration of the nerve agent would inevitably lead to the Skripals' death, a press officer of the Russian Embassy underscored. The fact that Yulia Skripal and Detective Sergeant Nick Bailey have already recovered and Sergei Skripal feels much better confirms the assumption that the three were rather poisoned by BZ than A-234, he concluded.

However, the Swiss laboratory avoided challenging Porton Down and the OPCW, stating in its tweet that only the OPCW can comment on the use of BZ in the Skripal case.