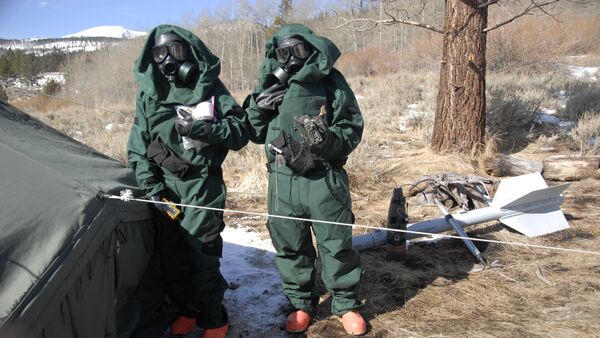 Ilya Tsukanov
All materialsWrite to the author
Spiez Laboratory's report that it found traces of the NATO military-grade incapacitating agent BZ in its sample of the chemical used in the Skripal attack has left people in the UK and around the world rushing to find out more. Having dug through all the details, Sputnik has compiled everything you need to know about BZ.

BZ, known chemically as 3-Quinuclidinyl benzilate, is a hallucinogenic chemical warfare agent discovered by Swiss pharmaceutical company Hoffman-LaRoche in 1951. Chemists discovered it accidentally while working to create an ulcer medication.

The mostly non-lethal agent is colorless, odorless, and practically insoluble in water, and very powerful. When used as an aerosol (the most common method of application), BZ is absorbed through the respiratory system; it can also be absorbed through the skin or digestive system. It takes about one hour for the agent to begin to take effect, with peak effect reached after 8-10 hours.

According to the Handbook of Toxicology and Chemical Warfare (2015), less than one milligram of BZ administered orally results in incapacitation for several days. Symptoms of exposure to the drug include delirium, tremors, stupor, hallucinations, "and coma that can last for more than 2 days." Other symptoms include paranoia and mania.

Tested By (and On) US Troops

After finding out about the chemical's existence, the US Army began testing 3-Quinuclidinyl benzilate on its troops. Maryland's Edgewood Arsenal experimented with BZ, along with LSD, THC, ketamine, opioids and other drugs on hundreds of military personnel and civilians into the mid-1970s. Originally designated 'TK', the chemical agent received the NATO designation BZ in 1961.

The US Army Chemical Corps weaponized BZ in 1962, mass producing the agent and packing it into the M44 smoke generator cluster and M43 BZ cluster bombs for use against squad or company-sized enemy forces. Between 1962 and 1988, 1,500 M44 and M43 rounds were produced, and stored at the Pine Bluff Arsenal in Jefferson County, Arkansas. 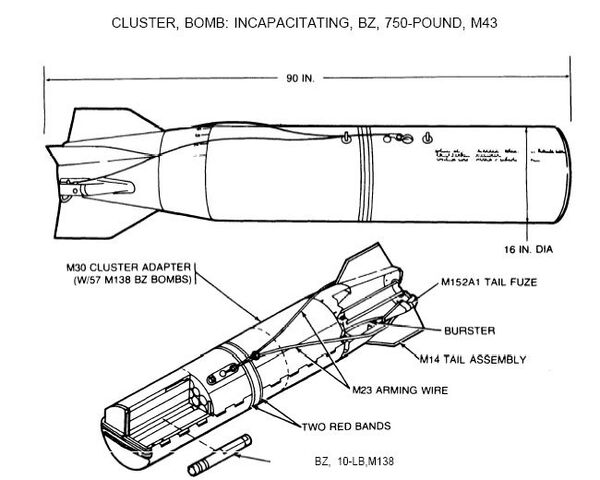 BZ was not deemed to be particularly combat effective, with exposure to the agent preventable through the use of cloth cover one's mouth and nose; the visibility of the white clouds set off by the M44 and M43 rounds was also problematic. The chemical also proved costly. The US is said to have destroyed its BZ stockpile in the late 1980s. According to Russian estimates, the US retains the capacity to produce about 20 tons of BZ per year. Production capacity outside the US is estimated at one ton per year due to difficulties in obtaining the chemical's 3-quinuclidine precursor. 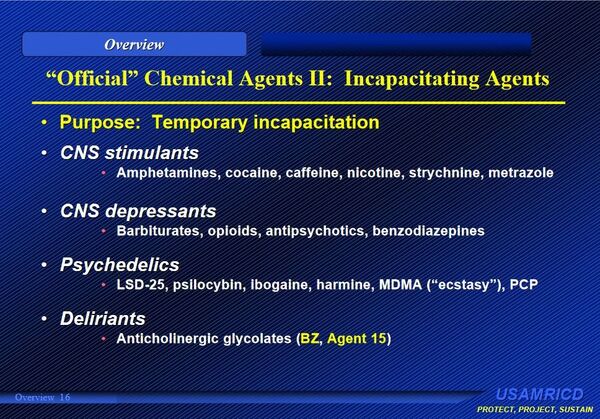 Not Stocked by the Soviets

What Russia Did With Its Soviet Chemical Weapons, and Where Else They Ended Up
The Soviet Union was aware of the US's chemical experiments involving BZ, but did not engage in its own experimentation with the chemical. The Soviet chemical arsenal consisted of deadly sarin, Soman, VX, and other nerve gases, as well as Lewisite and Mustard-Lewisite Mixture blister agents, most of them deployed in chemical artillery shells. Russia dismantled its stocks of these agents over 21 years beginning in 1996. The last Russia's Soviet-era stocks of chemical weapons were destroyed in September 2017. The Organization for the Prohibition of Chemical Weapons confirmed the weapons' destruction.

On April 14, Russian Foreign Minister Sergei Lavrov revealed that Spiez Laboratory had found BZ in a sample of the poison used to attack Sergei and Yulia Skripal, whom eyewitnesses said appeared to be suffering from hallucinations when they collapsed outside a mall in Salisbury, southern England on March 4, 2018.