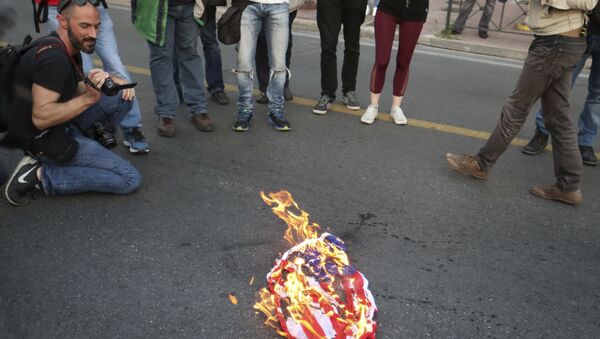 The global community has been on edge for the past few days after US President Donald Trump tweeted that the US would launch an attack on Syria sometime soon. The message has prompted large-scale pacifist protests across the world – in the US itself, the UK and Greece, to name a few.

Multiple airstrikes on Syria, however, took place, right under the cover of night on Saturday.

Anti-war demonstrations swept across Athens on Friday evening with protesters burning down a US flag near the American Embassy, Greek media reported.

The main rallying cry in the several-thousand-strong demonstration was the following: "Greece must not be involved in a potential US operation in Syria," the newspaper To Proto Thema reported.

Protesters came up to the US Embassy chanting, "The only enemy is imperialism." Near the building they unfurled posters reading "US, NATO, hands off Syria," "Yankees, go home" and "Down with NATO and its bases," the Greek weekly noted.

Separate demonstrations in downtown Athens were staged by the Communist Party of Greece and extra-parliamentary left-wingers, as well as organizations that had complained about the communists staging their protest independently.

"I regret to say that a pervasive imperialist war is more and more likely to be waged. The Greek government shoulders a huge responsibility to our people," Dimitris Koutsoumpas, the general secretary of the Communist Party of Greece said, as reported by the press service.

According to him, the Greek authorities must not allow Americans and other NATO members to set up military bases on Greek territory, which, to top it all off, also appears to be a military target.

Extra-parliamentary parties, including National Unity and ANTARSYA (literally: The Front of the Greek Anticapitalist Left) stated that at this critical moment, Greece and Cyprus have no reasons to partake and support the military ambitions of the West, which jeopardize Greece’s national interests, as well as peace and safety in the region.

"The US and its allies are getting ready with putting the Eastern Mediterranean regions and the Middle East on fire. We demand that the Greek territory, the country’s sea and air space be not used in the US’ interests. We are struggling for peace in the whole region," stated the National Unity party on behalf of the extra-parliamentary parties.

Earlier, Greek Prime Minister Alexis Tsipras told French President Emmanuel Macron during a telephone conversation that Athens wouldn't participate in a possible military operation initiated by the US and its allies in response to an alleged chemical attack in Syrian Douma, the Greek AMHA news agency reported.

The United States, France, and the United Kingdom launched 103 missiles against Syrian targets overnight on April 14, 71 of which were reportedly intercepted by Syrian air defense units. The strikes had been carried out shortly before the OPCW team was expected to arrive in Douma to determine whether the alleged chemical attack had taken place there.