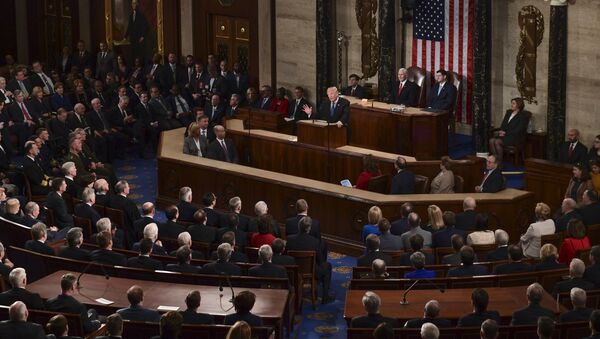 The lack of information and solid evidence on the alleged chemical attack by the Syrian government hasn't stopped the US, UK and France from responding with airstrikes.

The US state senator from Virginia, Richard Black, told Sputnik that the pretext used to carry out the airstrike on Syria is a clear fraud.

"Syrians wouldn't possibly use gas, since terrorists were quickly surrendering. Syria certainly wouldn't gas civilians and leave soldiers untouched. It was an obvious hoax," Black said on April 13 shortly after the airstrikes.

US Congressman from California Brad Sherman pointed out that no substantial proof has reached him and his colleagues.

That said, the Administration should have provided Congress with a classified briefing to show us how strong his proof is that al-Assad was behind the recent chemical attack.

These offensive strikes against Syria are unconstitutional, illegal, and reckless. The next speaker of the House must reclaim congressional war powers as prescribed in Article I of the Constitution. @SpeakerRyan has completely abdicated one of his most important responsibilities.

California’s Ro Khanna blamed the action as being unconstitutional.

Trump’s strike on Syria was unconstitutional. Our call for regime change in 2011 made the crisis worse. Americans of all parties seek to curtail our military interventionism. When will our elected leaders listen?

Senator Bernie Sanders pointed out that the "illegal" strikes can hardly improve the situation.

It is Congress, not the president, which has the constitutional responsibility for making war. The international community must uphold the prohibition against the use of chemical weapons, but it is unclear how Trump's illegal and unauthorized strikes on Syria achieve that goal. https://t.co/ps2HMIXZKu

​A member of the House Intelligence Committee, Adam Schiff, called the actions justified, but pointed at their thin legal grounds.

Bashar al-Assad’s chemical weapons attack against his own people merited a strong international response — these attacks must not be tolerated. However morally justified, the strikes risk serious escalation. Absent congressional authorization, they are also on thin legal ground.

Assad’s chemical attacks on his own people are wrong and require action. However the President’s decision to order strikes on a foreign country without authorization from Congress or a coherent strategy is unacceptable. Congress should immediately move to debate an AUMF. #Syria

Anyone who uses chemical weapons should be stopped. That includes Assad and the Russians. But we’ve seen this before, we’ve tried this response before, and it clearly failed. We need a strategy, Mr. President, not a series of contradictory tweets.

The vice chairman of the Senate Intel Committee, Mark Warner, also stated that the strategic goals must be cleared.

My statement on the Missile Strikes In Syria: pic.twitter.com/8IahHA3rLg

US Senator John McCain, the chairman of the Senate Armed Services Committee, has endorsed the US strikes on Syria in a statement and called for a new strategy in the region.

The barbarism from the Assad regime will not be tolerated. America and its allies are together to deliver the consequences from such heinous action. God bless our men and women in uniform.

Senator from North Carolina Thom Tillis liked the clear message to the Syrian government, sent with the attack.

America's targeted strikes, made in conjunction with our allies, send the Assad regime a clear and direct message that the use of chemical weapons against innocent civilians will not be tolerated.

The United States, the United Kingdom and France launched airstrikes at Syrian targets over reports of a chemical attack in the city of Duma, allegedly carried out by the Syrian government.

Damascus has refuted the allegations of the attack, while Moscow has warned that the reports of the attack could be a provocation.
Russian Defense Ministry spokesman Maj. Gen. Igor Konashenkov said at a briefing on Friday that a video depicting victims of the alleged Douma chemical attack receiving first aid, which had been shared via social media, was staged. According to the spokesman, the participants of the video were found, and they revealed the truth.