No More Bombs: Protest in London Against Syria Escalation by Trump, May 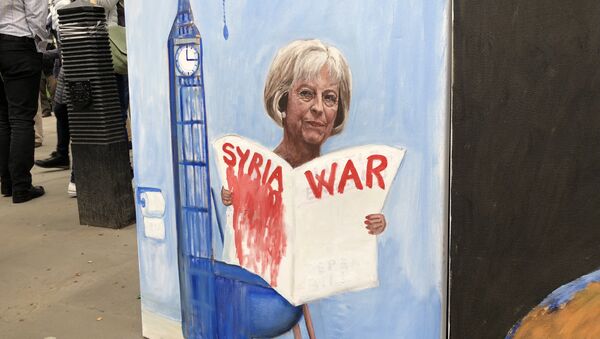 © Sputnik / Evgenia Filimianova
Subscribe
On Friday, April 13 campaigners from the Stop the War Coalition (STWC) have staged a protest outside the residence of the UK Prime Minister Theresa May, urging her to refrain from joining in any US-led strikes in Syria.

The protesters presented a letter signed by a number of politicians, celebrities, academics and trade unionists saying that "further military intervention, as proposed by Trump, May, or Macron, is not the solution."

According to STWC campaigners, foreign military intervention, including by the UK, has only deepened and prolonged the Syrian conflict.

On April 12, Theresa May held discussions with her cabinet, where it was agreed it was vital "the use of chemical weapons did not go unchallenged." The British PM also spoke to her counterpart in the US over the phone, agreeing the two countries would cooperate closely on an "international response" to the alleged use of chemical warfare in Syria's Douma. 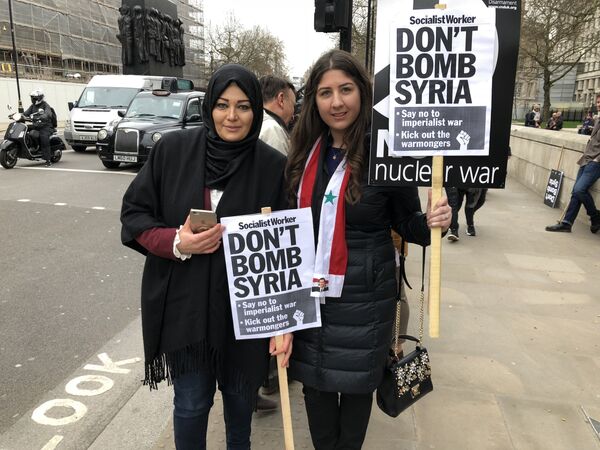 Live from Downing Street, London where crowds protest against Britain and the US launching military strikes in Syria
© Sputnik / Evgenia Filimianova

Ada, a Syrian girl from Damascus, who has ben residing in London since 2017, explained to Sputnik why she came to the event:

"I'm here today because I want to help my country. We were a very peaceful country. And although we are a peace-loving people, when we faced a life with this situation, we chose to live and fight standing side by side with our national army who is fighting foreign jihadists who are destroying our beloved country. The real problem is that wold leaders do not take care of Syria, if it's destroyed or not. They want to manipulate our independent government and our elected President Bashar Assad whom we trust to lead us through darkness to the victory. I'm certain of a victory in this battle between good and evil."

The Syrian government has refuted the allegations by Western leaders and said it destroyed all of its chemical weapons, a claim confirmed by the Organisation for the Prohibition of Chemical Weapons (OPCW).

The OPCW fact-finding mission will establish facts surrounding the alleged used of chemical weapons Douma. They are due to start work on April 14.

‘#Russia are the only ones doing the right thing at the moment’ — London protester against UK strikes in #Syria pic.twitter.com/V2JVRSklpP

Another protester shared his stance of the issue with Sputnik.

"Syria wouldn't exist today if Russia hadn't intervened. America and Britain would have got their way, Assad would have been out of office, and the Syrian people now be refugees. If Russia wasn't there, we wouldn't be standing here today, because there would have been no need for it."

He urged London to stay out and "stop giving money to terrorists".

"The White Helmets aren't an independent body; they lied about what happened with this chemical attack. They staged it, with support by the British government. No action has been taken, and they're still perpetuating this lie that they need to go in."

The protester said Western governments were plotting a power change in Syria just like in Libya and Iraq. He slammed UK politicians for for not caring about people and saying anything provided "their pockets  are getting filled".

The whole fact that this Syrian crisis happened is because Western governments have perpetuated a lie and said Assad was a tyrant. The people voted for him! The people elected him. Syria is a sovereign country.

Even though the British PM is not legally obliged to get the parliament's permission to launch military action in Syria, the leader of the opposition Labour Party, Jeremy Corbyn, stressed the parliament should have the chance to debate and make its decision.