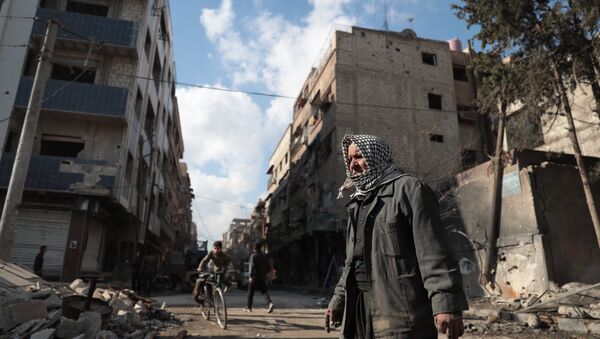 MOSCOW (Sputnik) - Claims of Damascus' of alleged use of chemical weapons in the Syrian city of Douma are provocation aimed at reinforcing terrorists, and concealing the existing links between western countries and the militants fighting in Syria, Tarek Ahmad, a representative of the Syrian Social Nationalist Party (SSNP), told Sputnik on Monday.

On Saturday, reports emerged about the alleged use of chemical weapons in the Damascus neighborhood of Douma by the Syrian government forces. The European Union and the United States said forces of Syrian President Bashar Assad were behind the attack. The Syrian state-run SANA news agency, in its turn, reported, citing Syrian officials, that the accusations of chemical use against Damascus were a provocation perpetrated by the Jaysh al-Islam group and other militants to hinder the advance of the Syrian government’s army.

"The militants know that they are losing. I was in Syria's Eastern Ghouta last week and I can assure you that many [pieces of evidence], which are currently in the hands of Syrian journalists and the Syrian army, prove that those terrorist groups are directly connected to the United States, the Saudis, and the western governments. They are afraid that after the militants’ defeat, this information will be made public," Ahmad said.

This evidence also shows that militants, supported by the West and some regional players, are preparing an offensive against the Syrian Arab Army, the politician added.

The Russian Center for Syrian reconciliation, operating in the Middle Eastern country, refuted the reports about chemical weapons use in the area of Eastern Ghouta, where Douma is located. Moreover, the center said that doctors from Douma denied media reports about receiving patients with symptoms of exposure to toxic substances.

Syrian Douma Residents Protest Against Jaysh al-Islam Militants - Activist
On Sunday, the Russian Foreign Ministry noted that the information about the alleged use of chemical weapons by the Syrian government forces originated from the non-governmental organization the While Helmets, known to have links to terrorists. Such information campaigns about the alleged chemical attack by Damascus are aimed at justifying possible external military action in Syria, the ministry added. The ministry also warned against any military action based on fabricated reports, adding that it might have grave consequences.

Russian Foreign Minister Sergei Lavrov said earlier on Monday, that Moscow and Damascus had repeatedly warned about possible provocations with the use of hazardous substances against civilians aimed at accusing the Syrian authorities of being responsible.