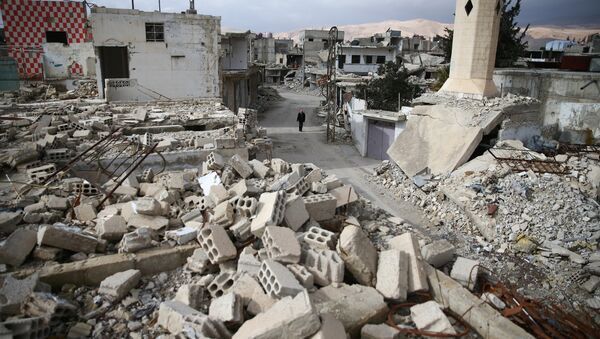 © REUTERS / Bassam Khabieh
Subscribe
The locals of Ghouta who have suffered most of the terrorist acts that made them seeking the safety outside of their towns give a response to a series of demands, with the foremost a military firm line against terrorists and the full establishment of state control over Douma in Eastern Ghouta.

Jaysh al-Islam militants retain control over the city of the Duma in Syria's Eastern Ghouta, the Russian reconciliation center for Syria informed.

"The most difficult situation is in the city of Duma [Eastern Ghouta]. The illegal armed formation 'Jaish al-Islam' retains control over this settlement," center's commander Maj. Gen. Yuri Yevtushenko said at a daily briefing.

Earlier in the day, the Syrian government and the Jaysh al-Islam militants have reached a deal on the release of all prisoners in exchange for providing a safe exit for militants to the city of Jarabulus, according to the Syrian state media.

"Humanitarian corridor with a checkpoint in Muhayam Al-Wafedin district has been reopened. Fighting in the city of Duma has been discontinued," center's commander Maj. Gen. Yuri Yevtushenko said at a daily briefing.

The official noted that it was just another proof that no chemical weapons were used in this area, and all accusations against Syrian government troops from the West are nothing more than another fake.

Up to 8,000 militants and about 40,000 of their relatives are scheduled to withdraw from Duma, Yevtushenko stated.

Last week, the Russian military announced a preliminary agreement between the Syrian army and the Jaysh al-Islam radical movement on ending hostilities, disarmament, and their withdrawal from Douma. According to the deal, the militants must show minefield and tunnel maps and voluntarily clear buildings and transport routes of mines before their pullout.

Since February 18, Syrian government forces have been conducting operation dubbed Damascus Steel in Eastern Ghouta in a bid to clear the area of militants that had been attacking the Syrian capital from.

000000
Popular comments
the people should arise and take back their homes and show extreme prejudice as the saying goes, in disposing of the terrorists. That may be the only way to effectively deal with such degenerates. If terrorists (including the usg, nato, eu) know that the people will not act like sheep but will fight tooth and nail for their homes, their families and their values then, the price of attacking will be considered too high.
michael
8 April 2018, 23:22 GMT
000000
Anti-terrorist SAA hero-warrior liberators to the rescue again - thanks also to pro-democracy Russia and Iran once more. The lying ZioCon war criminals and their sicko terrorists are even more bitter now - as sickly bitter as the chemicals they use on innocent civilians like those in this article!!
The Thoth
9 April 2018, 01:31 GMT
000000
Newsfeed
0
New firstOld first
loader
LIVE
Заголовок открываемого материала
Access to the chat has been blocked for violating the rules . You will be able to participate again through:∞. If you do not agree with the blocking, please use the feedback form
The discussion is closed. You can participate in the discussion within 24 hours after the publication of the article.
To participate in the discussion
log in or register
loader
Chats
Заголовок открываемого материала
Worldwide
InternationalEnglishEnglishMundoEspañolSpanish
Europe
DeutschlandDeutschGermanFranceFrançaisFrenchΕλλάδαΕλληνικάGreekItaliaItalianoItalianČeská republikaČeštinaCzechPolskaPolskiPolishСрбиjаСрпскиSerbianLatvijaLatviešuLatvianLietuvaLietuviųLithuanianMoldovaMoldoveneascăMoldavianБеларусьБеларускiBelarusian
Transcaucasia
ԱրմենիաՀայերենArmenianАҧсныАҧсышәалаAbkhazХуссар ИрыстонИронауОssetianსაქართველოქართულიGeorgianAzərbaycanАzərbaycancaAzerbaijani
Middle East
Sputnik عربيArabicArabicTürkiyeTürkçeTurkishSputnik ایرانPersianPersianSputnik افغانستانDariDari
Central Asia
ҚазақстанҚазақ тіліKazakhКыргызстанКыргызчаKyrgyzOʻzbekistonЎзбекчаUzbekТоҷикистонТоҷикӣTajik
East & Southeast Asia
Việt NamTiếng ViệtVietnamese日本日本語Japanese俄罗斯卫星通讯社中文（简体）Chinese (simplified)俄罗斯卫星通讯社中文（繁体）Chinese (traditional)
South America
BrasilPortuguêsPortuguese
NewsfeedBreaking
13:19 GMTJust Another Day in Space: Massive Asteroid to Approach Earth
13:18 GMTPalestinian Sets up West Bank’s 1st E-Waste Processing Plant, But It Won’t Solve Pollution Problems
13:16 GMTFive People Killed as Almaty Resident Opens Fire at Bailiffs, Police Officers
13:10 GMTManchester United Midfielder Paul Pogba Told to Shut His 'F***ing Mouth' by West Ham Fans - Video
12:44 GMTWhat Does the Future Hold for Prince Andrew?
12:36 GMTElysee Palace: US Never Mentioned AUKUS and Never Answered France's Questions
12:35 GMTCanada’s National Election Day Begins as Polls Open in Newfoundland, Labrador
12:30 GMTIranian Commander Says US’ ‘Humiliating Escape’ From Afghanistan Lesson for Dependent Allies
12:30 GMTIndia's Top Sikh Organisation Suspects Attack on Washington Worship House is Racial
12:21 GMT‘Disappointed’ Senate Dems Blocked From Attaching Immigration Reform to Biden's Massive Budget Bill
12:16 GMTIt's a Girl: Compromised Royal, Prince Andrew, Welcomes New Grandchild
11:52 GMTElection Commission: United Russia Ahead With 49.82% in Parliamentary Vote as 99% of Ballots Counted
11:49 GMTUK Crisis: Why Are Gas Prices Surging, Leading To Massive Spike In Cost Of Energy To British Homes?
11:30 GMTPoland to Boost Defence on Border With Belarus by 500 More Troops
11:24 GMTOne Person Killed, Four Injured in Freight Trains Collision in Guinea, Reports Say - Photos
11:23 GMTIran Dismisses NYT’s Account of Mossad Assassination of Nuclear Scientist as Just ‘Newspaper Report’
11:20 GMTLabour MP Seeks Party Position Clarity Over Transgender Issues Amid Online Threats
11:16 GMTKosovo Bars Serbian-Registered Vehicles From Entering
11:15 GMTBoris Johnson to Face-Off with Amazon Founder Jeff Bezos Over E-Commerce Giant’s Low UK Tax Payments
11:04 GMTAll About Decision Making: PSG's Pochettino Explains Why He Substituted Messi During Match With Lyon