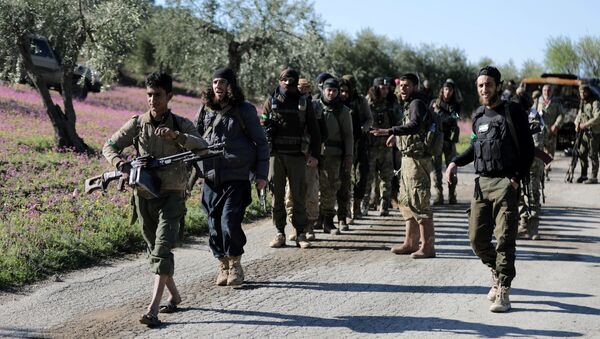 According to the French media, French president Emmanuel Macron is planning to deploy troops to Syria's Manbij to help local Kurds in resisting Turkish forces. The move has reportedly been coordinated with Washington. Sputnik discussed relations between France and Turkey with Gearóid Ó Colmáin, Paris-based geopolitical analyst and journalist.

Sputnik: What can you say about the conversation between the Turkish and the French presidents? It seems that there is quite a bit of disagreement. Do you think that there are issues other than cooperation with the SDF that they are in disagreement about when it comes to Syria?

Gearóid Ó Colmáin: If you look at the history of French-Turkish relations even going back to the sixteenth century, France generally used the Ottoman Empire as a stick with which to beat the central European powers, the Habsburgs in the sixteenth century and later — Austria. I think French policy towards Turkey in the current context is similar with important differences in sense that France sees Turkey as an emerging imperial power and as a rival. It is probably one of the reasons for France's hostility towards Turkey's entry into European Union, because the Turkish military is extremely powerful, it's reputed to be even more powerful than the French military and the French want military dominance in the European Union context.

That's one tension between France and Turkey, and with respect to the Kurdish problem, the US is supporting the YPG forces, which are linked to the PKK [Kurdistan Workers' Party] in Turkey, so, from the Turkish perspective, it is a national security threat to have a buffer state, develop in northern Syria, which will have access to the eastern Mediterranean. But the western side of the NATO coalition clearly wants that to happen. That has been the case throughout the war. The have supported the Kurds and that has been to the chagrin of the Turks. We now have a situation whereby Turkey is at war with France, effectively over the Kurdish issue. It is a proxy war. The French recently, in the mold of Francois Hollande, the former French president, accused Russia of allowing Turkey to enter Northern Syria in order to weaken and divide NATO. The French and the Americans are clearly concerned about Turkey's rapprochement with Russia, its recent agreement to cooperate with Russia.

So Turkey is kind of in a difficult position right now — on the one hand it's cooperating with Russia, on the other hand it's NATO member who is effectively at war with another NATO member, i.e. France and possibly the US. We don't know what the United States really means, what Trump really means, when he says the US is going to pull out of Syria. They reportedly have 20 military bases in the country right now. […] It looks like the French are taking over, or at least offering to take over, where the Americans are leaving off.

Sputnik: So that was the gist perhaps of Trump's statement saying that "We're going to be leaving Syria very very soon and let the other people take care of it." Do you think France was intended as "the other people"?

Gearóid Ó Colmáin: It looks to me to be the case. The French are clearly pursuing US policy in Syria and have been from the very start of the war. They don't have an independent policy in the Middle East and haven't had an independent policy since Chirac. France is clearly working on behalf of the United States and I think that will be my reading of it right now.

Sputnik: Does France have any of its own interests in the Syrian conflict? Other than what is dictated by American policy.

Sputnik: The proposal was already declined by Ankara. They said that those who cooperate with terror groups against Turkey will become a target for Turkey. How is that going to impact Turkey's relations with France and the EU in general?

Gearóid Ó Colmáin: Turkey has already threatened the EU on several occasions — last year, year before Turkey threatened to unleash an avalanche of migrants on Europe, to intensify the migrant crisis in Europe, if the EU would not concede to their demands, regarding funding and accession conditions [to the EU]. Turkey has already basically threatened Europe with coercive engineered migration, as a form of warfare, if the European Union doesn't fully cooperate with Turkey's demands. That is something that you could see escalating.