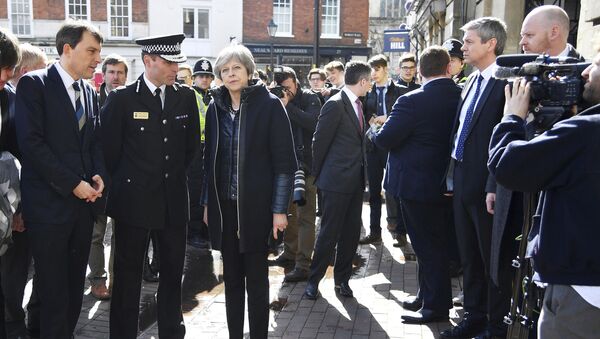 The EU's hasty response to the poisoning of former spy Sergei Skripal risks turning out to be flawed, Alexander Cerny, deputy chairman of the defense committee in Czech lower chamber, told Sputnik, commenting on the UK-led expulsion spree which resulted in the deportation of more than 100 Russian diplomats.

The expulsion of Russian diplomats appears to be yet another link in the chain of Europe's gross political mistakes, according to Alexander Cerny, deputy chairman of the defense committee in Czech lower chamber.

"As for the deporting of Russian envoys, I would only say that in the past we have already witnessed several major political mistakes," Cerny told Sputnik Czech Republic. "I remember how we were looking with absolute certainty for chemical weapons in Iraq. And in the end we did not find any. I am afraid that this case will remain unverified, or it may turn out that everything happened not in the way it is now being presented."

Why Israel Refused to Expel Russian Envoys Over the Skripal Case
At the same time the Czech politician expressed growing concerns about the US-promoted armament issue. He stressed that he "fundamentally disagree[s] with the demands of the American side to constantly increase military spending, as well as with the absolutely inconceivable thesis that the US and its NATO allies are fighting for world peace."

"I do not remember that any conflict has led to peace over the past twenty years," the politician pointed out. "They sometimes manage to win this or that war, but that does not mean that it contributes to the peace in the region. As a rule, quite the opposite happens; in general, I have big doubts about the peacekeeping goals of the US and NATO."

According to Cerny, the continuous muscle-flexing and the boost in military spending may pose a significant threat in the future. He expressed his firm belief that the foreign policy of major global powers, most notably the US, should develop in a totally different direction.

Ex-Russian FSB Agent Blasts UK PM May for 'Illiterate' Skripal Case Accusations
Meanwhile, on March 28 Paul Ryan, the speaker of the US House of Representatives, visited the Czech Republic and delivered a speech addressing the Chamber of Deputies of the country's parliament.

Although some observers see Ryan's semi-official visit as a tribute to the 100th anniversary of the founding of Czechoslovakia, Radio Prague emphasized its importance amid the ongoing diplomatic row over the poisoning of former spy Sergei Skripal and his daughter in Salisbury, England.

"As we gather to celebrate the ties of the last century, we are called to confront the challenges of the next century. The Czech people are no strangers to Russian influence, whether in the guise of oppression or whether in the guise of subversion," Ryan said, claiming that Russia not only does not share US and European values, but is effectively trying to undermine them.

Commenting on the US politician's speech, Cerny noted that he was "disappointed" with it, as it was "hollow" and "full of ideological clichés." However, as the Czech politician noted, it does not differ much from what the other top US officials say.

Russian Embassy Outraged at UK Media’s One-Sided Coverage of Skripal Case
"They look at everything superficially and do not think about the consequences of their actions, otherwise they would not have so irresponsibly strengthened hatred and enmity between peoples," Cerny opined.

When asked why Czech President Milos Zeman did not meet with the American Speaker of the House Paul Ryan, Sputnik's interlocutor responded that the two have differences of opinion on too many issues, including the Skripal poisoning case.

"President [Zeman] gave an order to check whether such chemical weapon [A-234 nerve agent] could have been accidentally manufactured on the territory of the Czech Republic," Cerny said. "We know that our chemists are leaders in this field, so it is quite likely that previously they could have come in contact with these chemical substances. At least, they could have been there in the past. All this may be true, so it's good that Zeman asked the Security Information Service (BIS) to verify this information."

Cerny noted that President Zeman is not interested in the growth of tensions between global powers, including Russia and European states as it would lead to nowhere.

On March 4, former MI6 agent Sergei Skripal, 66, and his daughter Yulia, supposedly fell victim to a chemical attack by A-234 nerve agent in Salisbury, the UK. While Sergei Skripal still remains in a critical condition, his daughter has regained consciousness and the ability to talk, according to the BBC.

The Salisbury incident prompted the large-scale UK-led diplomatic row: following in the footsteps of London, which groundlessly accused Moscow of "attempted murder" of the ex-spook, over 20 countries, including the US and Canada, expelled Russian diplomats.

The Czech Republic was among the EU states that followed Britain's suit on Monday. President Zeman signaled that he hadn't contributed to the move, asking whether the UK would present any evidence to confirm its accusations.

"I want to know the facts. I will certainly welcome if the United Kingdom presents some evidence that the Russians wanted to kill agent Skripal," the Czech president underscored.

The views and opinions expressed by Alexander Cerny are those of the speaker and do not necessarily reflect those of Sputnik.