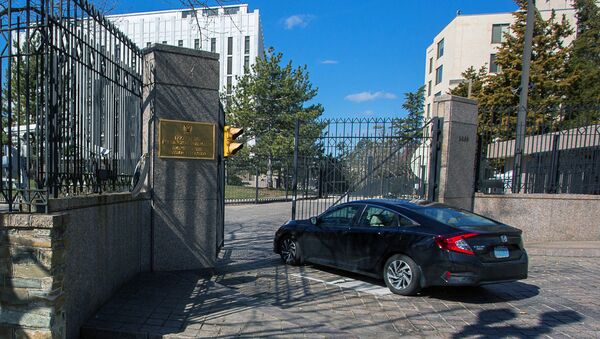 Touching upon Washington's decision to expel 60 Russian diplomats during an interview with Sputnik, Mikhail Lyubimov, a former Soviet intelligence agent turned writer, has described the move as a foolish step which indicates President Trump's dependence on anti-Russian circles in the US.

83-year-old Russian writer Mikhail Lyubimov, who previously served as an intelligence agent, suggested that several European countries "certainly agreed with each other" before they announced the expulsion of Russian diplomats.

"But it is rather modest for a mass political action," Lyubimov said, referring to a decision by Germany, France and Poland to expel four Russian diplomats each.

He also said that he is "surprised" about the White House's move with respect to employees of the Russian diplomatic mission in the US.

"I thought they wouldn't do such a stupid thing. But what can [US President Donald] Trump do? He is completely shackled, and he has already given the go-ahead for biting the anti-Russian bone," Lyubimov pointed out.

On Monday, 16 European countries as well as the US, Canada, Albania, Norway and Ukraine announced that they are expelling Russian diplomats due to Moscow's alleged involvement in the March 4 nerve agent attack on former Russian spy Sergei Skripal and his daughter in the UK city of Salisbury.

US President Donald Trump has ordered the expulsion of 60 Russian diplomats, while Ottawa, like France, Germany and Poland, announced that it is expelling four employees of the Russian diplomatic mission in Canada.

READ MORE: So What Evidence is There Linking Russia to Skripal Nerve Agent in Salisbury?

Russian Ambassador to the US Anatoly Antonov has, in turn, pledged that Moscow would respond in kind to Washington's decision.

Russia has stressed that the move rides roughshod over the investigation into the Skripal case.

Earlier, UK Prime Minister Theresa May blamed Russia for being behind the Skripals' poisoning and announced the expulsion of 23 Russian diplomats from Britain.

Moscow rejects the accusations, calling for a joint investigation into the matter. It has expelled UK diplomats from Russia in a tit-for-tat move.

The views and opinions expressed by Mikhail Lyubimov are those of the speaker and do not necessarily reflect those of Sputnik.