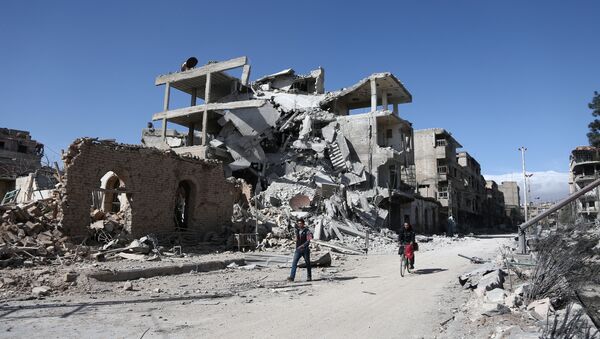 MOSCOW (Sputnik) - The United States, the United Kingdom and France have been waging an information war since the beginning of the conflict in Syria in order to prolong it, mainly through claims that Damascus is using chemical weapons, Syrian Ambassador to Russia Riyad Haddad told Sputnik on Thursday.

"The countries that support terrorism, the United Kingdom, France, under the leadership of the United States, since the very beginning on the terrorist war, forced on Syria, are using the information warfare, fabricating facts, confusing, lying, misinforming the public opinion, and it is done to prolong the war under the pretext of the use of chemical weapons by the Syrian Armed Forces," the ambassador said.

Haddad mentioned the Western information warfare campaign in the context of multiple allegations leveled against Russia by London over the recent poisoning of former Russian intelligence officer Sergei Skripal, currently treated for exposure to a chemical substance.

"It comes as no surprise that they are using the same pretext against Russia, but with a different script," the diplomat said.

The United Kingdom has accused Moscow of orchestrating the attacks on the former spy, although it did not provide any evidence to support the claim. London said Skripal and his daughter were exposed to the A234 nerve agent, which, according to UK experts, belongs to the family of Novichok chemical weapons, developed in the Soviet Union.

Fake News Alert: Media Stirred Over White Helmets' 'New' Horror Movie
Moscow has rejected the accusations and asked to be given access to the samples of the substance, however, its request was denied.

Damascus has faced multiple accusations of using chemical weapons against Syrian civilians. The investigation into some of the incidents was carried out by the Joint Investigative Mechanism (JIM) of the United Nations and the Organization for the Prohibition of Chemical Weapons.

JIM presented a report on its findings to the UN Security Council in October, putting the blame on the Syrian government. Russia has questioned the impartiality of the panel and called for the review of the JIM's methodology.