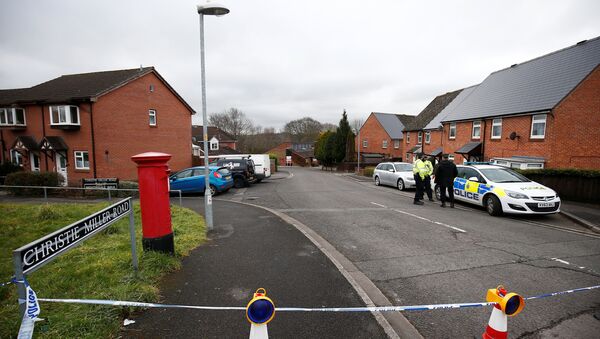 The UK's certainty of Moscow's involvement in Skripal's poisoning has increased after last week's statement by UK Prime Minister Theresa May, claiming that it was "highly likely" that Moscow was behind the poisoning of the ex-Russian intelligence officer.

"I am clear that what we have seen shows that there is no other conclusion but the Russian state is culpable for what happened on the streets of Salisbury," May said, rejecting the denial by Russian President Vladimir Putin.

The UK prime minister's claim comes the day after Putin called the allegations of Russia's involvement in the poisoning "nonsense," as Russia does not even have chemical weapons, because it destroyed all of it, unlike a number of its international partners.

Earlier in the day, presidential spokesman Dmitry Peskov noted that a phone conversation between the Russian president and the UK prime minister had not been planned yet.

Russian Diplomats Expelled From UK to Fly Out of London Tuesday - Source
Bilateral relations between Russia and the United Kingdom deteriorated following the attempted poison attack on former Russian intelligence officer Sergei Skripal and his daughter in Salisbury. May blamed the incident on Moscow, claiming that the substance allegedly used in the attack was developed in Russia and announced the largest expulsion of Russian diplomats from the UK since the Cold War.

Russia denied all accusations and expressed readiness to collaborate on the investigation. On Saturday, Russia announced retaliatory measures against the United Kingdom, declaring 23 staff of the UK Embassy in Moscow personae non gratae in response to London's move.

Skripal and his daughter Yulia were found unconscious earlier this month on a bench at a shopping center in Salisbury. Both of them remain in critical condition and are being treated for exposure to an А-234 chemical substance.

Previously, former Russian intelligence agent Skripal had been accused of espionage on behalf of London. He fled the country and was later granted asylum in the United Kingdom as a part of a US-Russia spy exchange.