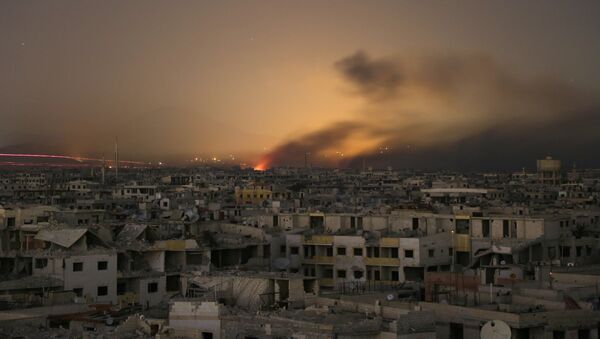 After the false flag chemical weapons attack, the US planned to strike government held districts in Damascus as a "response," according to the Chief of the Russian General Staff Valery Gerasimov.

Russian armed forces will respond if the lives of Russian servicemen in Syria are threatened, including in the event of a missile strike on Damascus, the Russian General Staff said.

"According to reports, after the false flag attack, the US plans to accuse the Syrian government troops of using chemical weapons, and to provide the world community with the so-called 'evidence' of the alleged mass death of civilians at the hands of the Syrian government and "Russia supporting it," the chief of the General Staff said. In retaliation, Washington, according to Gerasimov, "plans to launch a missile strike on the government-held districts of Damascus."

At the same time in Damascus, in the offices and facilities of the Ministry of Defense of Syria, there are now Russian military advisers, representatives of the Center for the Reconciliation of Warring Parties and military police, Gerasimov stressed.

"We have reliable information about militants preparing to falsify a government chemical attack against civilians. In several districts of Eastern Ghouta, a crowd was assembled with women, children and old people, brought from other regions, who were to represent the victims of the chemical incident, " Gerasimov said.

According to Gerasimov, "White Helmets" activists and film crews had already arrived at the scene with satellite video transmitters are already in place.

WATCH Syrian Army Cracks Down on Terrorists in Eastern Ghouta
"This has been confirmed by the discovery of a laboratory for the production of chemical weapons in the village of Aftris, which was liberated from terrorists," Gerasimov stressed.

"Despite constant attempts by militants to disrupt peace initiatives in Eastern Ghouta, the situation in the suburb of Damascus shows a trend toward stabilization. Since the entry into force of UN Security Council Resolution 2401 of February 24, 2018, [a total of] 145 civilians and 13 representatives of armed opposition, including 76 people overnight, have been withdrawn from Eastern Ghouta though the humanitarian corridor created by the Russian Federation," Gerasimov added.

The statement comes a day after US Envoy to UN Nikky Haley threatened with Washington's strike against Damascus in case the chemical weapons use in Syria.

Earlier, US Director of National Intelligence said that Trump Administration is considering new attacks against the Syrian Government in response to reports of chemical weapons' use.

​Damascus has constantly denied being in possession of chemical weapons, the destruction of which had been confirmed by the OPCW report.
When commenting on allegations of the Syrian army's use of chlorine in Eastern Ghouta, Syrian President Bashar Assad said that there are aimed at justifying an attack on Damascus.

Earlier, UN Resolution 2401, which was passed by the Security Council on February 24, urged the parties to the Syrian conflict to stop all fighting's and adhere to a humanitarian pause across the country in order to ensure the safe and unhindered delivery of humanitarian aid.

Eastern Ghouta was occupied by militants in 2012. According to the Syrian Army, there could be 10,000-12,000 militants in the area. But even after the UN resolution, the fighting has not ended.