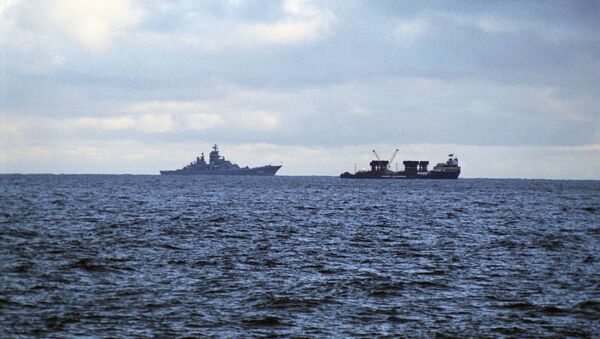 © Sputnik / Oleg Lastochkin
/
Go to the mediabank
Subscribe
International
India
Africa
MOSCOW (Sputnik) - In an interview for the film 'Putin' Russian President Vladimir Putin spoke about the development of the country's armed forces as well as cautioning against any distortion of history as a means of avoiding a recurrence of fascism.

"After the dissolution of the Soviet Union we faced great difficulties in economy, in the social sphere, in the army, of course the army could not be left untouched by that. And the tragedy of Kursk was a sign of the general state of the armed forces," Putin said.

The president noted that he had just begun to perform his duties when the disaster occurred.

"I even did not know that there were some significant drills. The [then] defense minister [Igor Sergeyev] phoned me and said that we had lost a submarine but it had been found and the work had been started. It was unclear that something tragic was happening, but later of course everything became clear," Putin said.

The Russian leader also confirmed results of the official investigation into the incident. The submarine was lost after an explosion in a torpedo room, which caused heavy fire and a further detonation of on-board ammunition.

Russia
Kursk Submarine Disaster: Remembering the Calamity 17 Years Later
The Kursk nuclear submarine sank on August 12, 2000, in the Barents Sea. According to the investigation team report, the first explosion was caused by a leakage of hydrogen peroxide fuel inside the fourth torpedo launcher. The bulkhead between the first compartment and the command post failed to stop the blast wave because of an open air conditioning duct and, as a result, all 36 people in the command post were killed. About 140 seconds later a fire led to the explosion of at least five combat-ready warheads, which inflicted heavy damages to the vessel.

Along with the official version of the disaster's causes there are many unsubstantiated speculations, from an explosion of a World War II mine to an attack by a foreign submarine.

The Kursk submarine disaster is one of the deadliest submarine incidents in history, second only to the loss of the USS Thresher in 1963, which saw 129 sailors killed.

The Russian army has not only been revived but has been created anew with new units, which has proved to be effective during the operation in Syria, Putin observed.

"Since 2013, the VKS [Russian Aerospace Forces] have been receiving 200 aircraft annually. We can surely say that our army has not just been revived, we created a new army with absolutely new units," Putin stressed.

The president pointed out that the new units have proven to be effective in Syria.

Russia
Russia Not Going to Engage In Arms Race - Kremlin
"There had been no such units in the armed forces before and they successfully performed in Syria," Putin added.

Russia Not a Threat to Anyone

"We will not threaten anyone, but, using our advantages, in this case territorial ones, we will ensure security of the Russian Federation and its citizens," Putin stated.

World
Stoltenberg Claims Russia 'Risks' Unleashing New Nuclear Arms Race in Europe
The president pointed out that, from the strategic perspective, the Arctic Region is especially important for Russia, as US submarines patrolling the Norwegian coast are capable of launching missiles that could reach Moscow in 15 minutes.

Putin added that Russia has an icebreaker fleet which will be further developed.

On March 1, addressing the Russian parliament, Putin said that Moscow was reinforcing its military infrastructure in the Arctic in order to ensure its interests in this strategically important region. The president also noted that Russia has, and will continue to possess, the strongest Arctic fleet in the world.

Russian President Vladimir Putin said that he has observed the working operations of the Armata tank from the inside, noting that this work is part of his job as Commander-in-Chief.

"I got into the tank and looked around. The Commander-in-Chief is obliged to do so, to look with his own eyes. This is part of my job," Putin noted.

Crimea and Sevastopol Never to Return to Ukraine

Putin said that there are no circumstances under which Crimea and Sevastopol will be returned to Ukraine.

"Are you crazy or something? There are no such circumstances, and will never be," the Russian president stressed.

Crimea reunited with Russia in 2014, after 97 percent of the peninsula's residents voted in favor of the move in a referendum. Despite the legal referendum, the reunification was neither recognized by Kiev nor by the majority of Western countries, including EU member states, who subsequently imposed economic and political sanctions on Moscow. Russia has repeatedly said that the referendum was conducted by Crimea in compliance with all international laws.

Possible Consequences of the "Yugoslav scenario" for Russia

One of the most pressing challenges during Putin’s first term was the issue of Chechen separatism, which became all the more dire following terrorist attacks in Moscow and other Russian cities.

Putin noted that if the "Yugoslav scenario" was implemented, the country's losses would be more serious than in the Chechen war.

READ MORE: The Murder of Yugoslavia

Ramzan Kadyrov, the current head of Chechnya, previously noted that if Putin had not become president at that time, "we would have lost Russia."

"Those who disintegrated the Soviet Union were ready to destroy Russia," Kadyrov added.

Putin said that the country escaped a repetition of the "Yugoslav scenario" mainly due to pro-Russian sentiments in Chechnya, and recalled the words of Akhmat Kadyrov, Ramzan's father, that "Chechnya can only develop as part of Russia."

Secret CIA Docs: Yugoslavia Had Uranium to Build Nuke by 1980, Had Help From US
The dissolution of Yugoslavia occurred in the wake of bitter ethnic Yugoslav wars during the 1990s, resulting in the constituent republics of the Socialist Federal Republic of Yugoslavia splitting apart. The Kosovo War of 1998-1999 between the ethnically Kosovar Albanian forces and the former Yugoslavia, then consisting of Serbia and Montenegro, ended after the UN-backed international intervention following NATO bombing of Yugoslavia’s forces.

In 2008, Kosovo unilaterally proclaimed independence from Serbia. Even though over 100 UN member states have officially recognized Kosovo, Serbia, alongside Russia, China, Israel and several other countries, did not recognize the move.

History Should Be Handled Carefully

"Of course, we all should, drawing conclusions from the past, never allow something like this [fascism] to happen in the future. We should be very careful about history and its purity, not allowing [historians] to juggle anything in history and not allowing any distortions," Putin added.

At the same time, Putin noted that he does not support the idea of blaming future German generations for the country's fascist past.

"I am not a supporter of forcing all generations of Germans to dust their heads with ashes and beat themselves with chains for the terrible past that their country, all of Europe and the whole world experienced, for the past connected with Nazism, fascism, in this case, with German fascism," Putin added.

Russia
'We Never Forget Role of the Soviet Army': Netanyahu on Defeating Fascism
Despite the fact that Russia suffered severely in World War II, Russians do not exhibit a hateful attitude toward the German people, the Russian president underlined.

"I have a feeling that there is no hate or internal rejection toward Germany or Germans among the Russian nation," Putin said.

Nazi Germany invaded the Soviet Union on June 22, 1941, opening the chapter of World War II known as the Great Patriotic War, which ended on May 9, 1945, with the Nazi surrender.