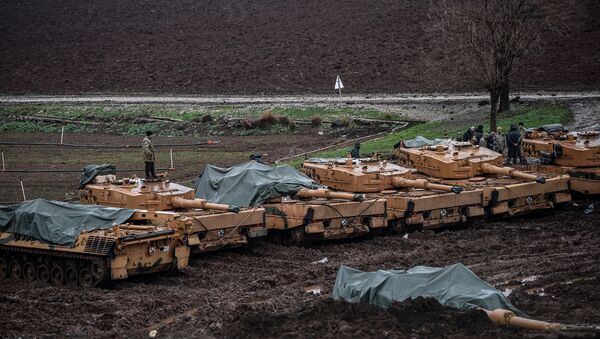 While the international community is working on designing unmanned vehicles and ships, Turkey comes with a more serious approach, amid their ongoing Olive Branch military operation in Syria's Afrin.

"If the defense industry of Turkey does not produce drones, then every drone shot down in Syrian Afrin will put us in a difficult position. Now, we do not think about it, replacing each shot down drone with a new one. We must take one step further, to learn how to produce unmanned tanks also. And we will do it," Erdogan stated.

Among such cases are the recent reports about Germany halting their supplies to Turkey of Leopard tanks, a move allegedly connected with the ongoing military operation Olive Branch.

According to the German newspaper Spiegel, halting arms deliveries to Ankara was a move aimed at appeasing sentiments in German society, as images of German Leopard tanks being used by the Turkish military in Syria are making the German public feel increasingly uncomfortable.

Ankara's operation was launched in response to US plans to train a 30,000-strong border force along Syria's northern borders, which will largely consist of Kurdish militants, considered to be terrorists by Turkey.

Turkey expressed its discontent over Washington's policies, with President Erdogan vowing to "strangle" the "terrorist army," which the US was allegedly going to create near its borders.

However, after the start of Turkey's offensive in Syria, Germany admitted that Turkey has "legitimate security interests along its border with Syria," according to the German Foreign Ministry's deputy spokesman, Rainer Breul.

A similar position has been expressed by the US, with the Pentagon's spokesman saying that America understands Turkey's legitimate concern over security along its borders.

Russia, in turn, responding to the situation in Afrin, repeatedly underlined that the principle of preserving Syria's territorial integrity and sovereignty is fundamental.