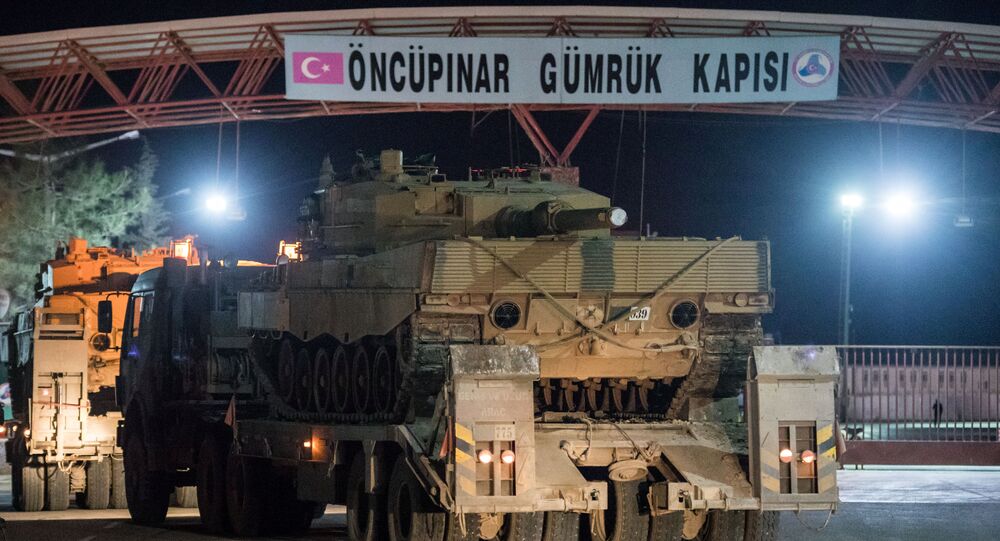 Kremlin closely follows Turkey's operation in Syria's northwestern Afrin district, the Russian representatives are in contact with both Damascus and Ankara on this issue, Kremlin spokesman Dmitry Peskov said Monday.

“We still believe that the principle of preserving Syria’s territorial integrity is fundamental. Of course, we are closely monitoring the humanitarian aspects that are connected with what is happening now in the Afrin district,” Peskov told reporters, commenting on the issue.

The situation in Syria escalated since the beginning of Turkish operation in Syria’s northern Kurdish-controlled Afrin.

© REUTERS / Mahmoud Hebbo
Afrin Tensions: US Warns Turkey Against Actions on Syrian Kurds as Ankara Insists on Right to Self-Defense
On Sunday, Turkish authorities said that at least one civilian was killed and 46 others injured after the city of Reyhanli in Hatay province was shelled from the northern Syrian district of Afrin. In addition, seven people were injured in the city of Kilis. Ankara has accused the SDF of the shelling.

The Kurdish-led Syrian Democratic Forces (SDF) have not shelled the southern Turkish city of Reyhanli, Rodi Osman, a representative of Syrian Kurdistan to Russia, told Sputnik on Monday.

On Saturday, Turkey launched Operation Olive Branch against the Kurdish forces in Afrin. Ankara stressed that operation is directed exclusively against the terrorists. On Sunday, Turkish Prime Minister Binali Yildirim confirmed the start of the ground operation in the region. Damascus condemned Turkey's attack on Afrin, equating it with "aggression".