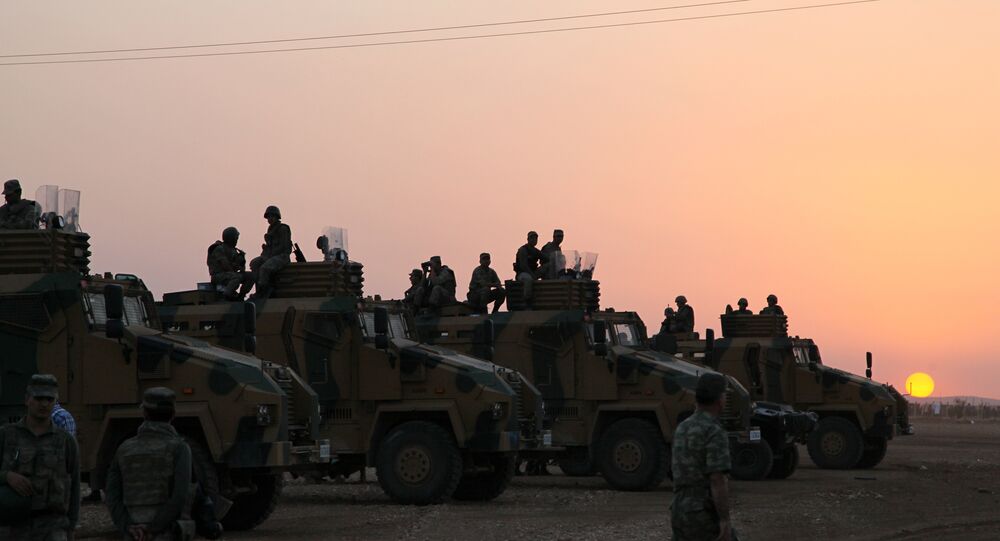 ANKARA (Sputnik) - Since the US confirmed training new force in northern Syria, tensions with Turkey have been running high, with Ankara accusing Washington of building a "terrorist army."

"The United States is now creating a terrorist army near our borders that threatens the security of Turkey. Our task is to strangle this army until it is born. If the United States wants to establish cooperation with these savage creatures, it is their business. But we will not allow this," Turkish President Recep Tayyip Erdogan said.

The president noted that the Turkish army would continue shelling the SDF positions in Syria's northern Afrin district.

"Our Armed Forces will hopefully solve the problem in Afrin in the near future, the operation may begin there at any moment," Erdogan added.

Erdogan's latest statement comes after earlier on Monday he said that the United States were forming a "terrorist army" under the disguise of so-called Border Security Force (BSF) on the Syrian territory controlled by the Kurdish-led Syrian Democratic Forces (SDF) militia, and threatened to eliminate these troops.

© AFP 2021 / ARIS MESSINIS
Turkish Forces Shell Syrian Kurds Targets in Northern Syria - Reports
Ankara's anger was provoked by the article published in the Defense Post on Saturday, in which the spokesman of the US-led coalition fighting against Daesh said that the coalition was engaged in a training of a 30,000-strong force on the territory within Syria currently controlled by the SDF to maintain security in controlled area along the Syrian border.

The coalition's representative clarified that a half of the planned force will consist of retrained SDF fighters, an alliance of militias in Syria dominated by the Kurdish YPG (People's Protection Units), which Ankara regards as a terrorist group associated with the Kurdistan Workers Party (PKK), banned in the country. Turkey has repeatedly accused Washington of arming Syrian Kurdish groups, which listed as terrorist organizations by Ankara.