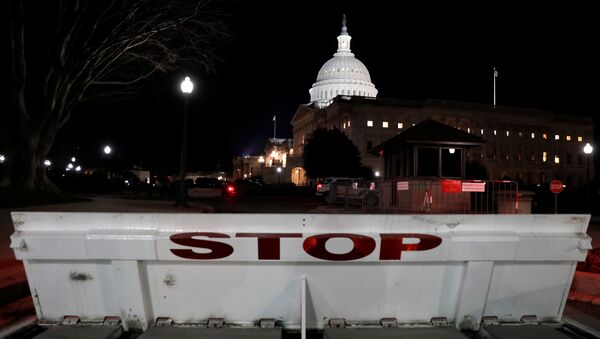 Twitter users have been quick to blame the GOP for the second US government shutdown this year.

US federal agencies had to cease their operations after Congress failed to pass a bipartisan budget deal. This is the second time within three weeks that US government agencies had to put their work on hold as a result of the disagreement over the budget deal. On January 18, the funding proposal to avert a government shutdown failed in the Senate.

Twitter users have rushed to comment on the second US government shutdown, with many commenting on a move by Republican Senator Rand Paul, who demanded a vote on an amendment to the spending bill that would keep caps on federal spending, which is expected to rise by a total of $300 billion over two years.

Good for @RandPaul for standing up for conservative fiscal principles. Lots of discretionary spending is wasteful & should be cut.

But, that's not the reason for our debt & deficits. Entitlement spending is the real fight worth a shut-down.

All else is mice-nuts in comparison

So, @RandPaul shut down the government because he's now worried about deficits? WHAT?

This is the same guy that voted with EVERY other Republican for the #GOPTaxScam that transferred BILLIONS to the top and drove TRILLIONS in deficits and debt (After Obama cut deficits by 2/3) pic.twitter.com/qpytNqDZ2u

Rand Paul Shutdown the Government over Deficits.... Hypocritically Forgetting he Voted for the #GOPTaxScam which Increases the Federal Deficit by $1.5 Trillion 🙄🙄

This is Paul Ryan’s shutdown. Period.

He doesn’t have a clean majority because he can’t whip the votes.

If he wants to end this, he will have to publicly promise a proper DACA vote.

Until then, stay strong Democrats. Not your fault the GOP can’t govern.

And I mean - Rand Paul is the one who makes a credible argument for the shutdown??? There isn't one Dem who can speak in politico, wrap themselves in the flag, and make a decent case for the Dreamers? pic.twitter.com/ltC6oY8msd

Many Netizens have criticized the Republicans and the US president over the second shutdown since Donald Trump had assumed office.

Second shutdown from the GOP-controlled Congress in the first few days of year two of the Trump Presidency, truly historic. #GOPShutdown

The U.S. government shut down is NOW!

Congrats on a Second shutdown Republicans in less than 30 days!

The Republicans have shut down the government again.

It’s midnight and the government has officially shut down for the second time in a manner of weeks. And @realDonaldTrump is to blame. Again. Retweet if you agree. #TrumpShutdown

Trump just a couple of days ago...

"I would love to see a shutdown"
pic.twitter.com/U9gMOrUbPj

Republicans have shut down the government AGAIN! We don’t need a #GOPShutdown. We need #DreamActNow!

It's official: the federal government shut down. A reminder that the last shutdown, which only lasted for 1 working day, cost $325 million.

Some have pointed to the different media coverage by US media outlets.

The government just shut down and Fox News is rerunning Hannity. What a joke.

Other Twitter users, however, seemed to find the fun side in the development.

Remember when the Goverment shut down twice in a month because Obama wouldn’t budge on policy? pic.twitter.com/tkrt1BTK3r

And we have yet another government shutdown. Thanks @RandPaul #GOPShutdown pic.twitter.com/hiGWOJjA2g

According to Rebecca Berg, house democrats are OBLIGATED to open up the government the Gop just shut down 2 hours ago? pic.twitter.com/8Gt16grFP8

The government is shut down. pic.twitter.com/vnQMnhEUm5

The U.S. Federal government has just shut down...

ANARCHY!!!!
I'm going to go jay-walk across the street and then loiter someplace. 😎👌🇺🇸#Shutdown

Those in favour of Facebook to be shut down raise your hand pic.twitter.com/1GbnHi62MF

The Senate runs out the clock and we're headed & pushes us into shutdown 2.0 pic.twitter.com/QibORBuUyz