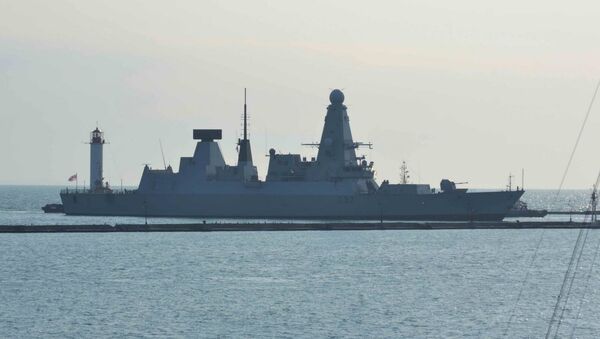 In recent months NATO has been increasing its activity in the Black Sea near the Crimean Peninsula, Radio Sputnik's contributor Sergei Ilyin notes, outlining apparent reasons behind the bloc's especial focus on the region. According to the journalist, Moscow has enough options to respond to any potential provocations near its borders.

An escalation of tensions in the Black Sea region is yet another instrument of political pressure on Russia amid its preparations for the March presidential elections, Radio Sputnik's contributor Sergei Ilyin writes.

"The North Atlantic Alliance knows that the borders of Russia, including the Crimean Peninsula, are effectively protected," the journalist notes. "None of the supporters of provocations seriously expect to succeed. What they, apparently, want is to touch [Russia's] raw nerve."

However, these actions may have quite the opposite effect, Ilyin remarked.

New S-400 Air Defense System Battalion Put on Combat Duty in Crimea
Earlier, the Pentagon reported that a Russian Su-27 jet forced a US Navy EP-3 Aries spy plane to give up its mission over the Black Sea.

Responding to US State Department criticism over what it called a dangerously close interception, the Russian Defense Ministry stressed that the Russian plane had not violated any international regulations.

For its part, the Russian Foreign Ministry called upon its American counterparts to resolve the issue at the negotiating table.

"The Russian side has repeatedly proposed to its American partners to clarify its provisions precisely with the goal of defining the minimum allowed distances for the approach of military aircraft. We had other ideas, as well, but the American side always avoided professional dialogue," the ministry said, reminding Washington that that the Crimean Peninsula remains an integral part of Russia.

In recent months — and even years — the Black Sea has become a focus of especial attention from Western countries and NATO, the journalist highlighted, adding that it is quite understandable: The region is strategically important for both Russia and the Atlantic military bloc, which regards Moscow as a "rival."

Russia Intercepts US Spy Plane in International Airspace Over Black Sea
On January 5, the guided-missile destroyer USS Carney equipped with the Aegis missile defense system and dozens of Tomahawk cruise missiles entered the region to "conduct maritime security operations and enhance regional maritime stability, as well as strengthen combined readiness and naval capability among NATO allies and partners," according to the US Naval Forces Europe-Africa official website.

Last summer several NATO warships entered the area to carry out joint military drills with Ukraine, while on July 25 the US Naval Construction Battalions, also known as the Seabees, officially kick-started the construction of a maritime operations center at the Ochakiv Naval Base, Ukraine.

Ilyin also emphasized the North Atlantic Alliance's unprecedented activity in the sky over the Black Sea.

Intensive surveillance operations are conducted near Russia's borders openly and on permanent basis, while the interception of NATO reconnaissance aircraft by Russian fighter jets have become commonplace, the journalist noted.

"However, every time the Pentagon groundlessly accuses its Russian counterparts of a 'dangerous approach.' Recently, another 'espionage air machine' was intercepted by a Russian Su-27. Judging by the released video, it was a virtuoso performance. The experience has already been accumulated," Ilyin remarked.

According to Radio Sputnik's contributor, one cannot rule out that Washington and its partners in the region would perform provocations in Donbass and Crimea. He drew attention to the Ukrainian Armed Forces increased activity near the self-proclaimed Donetsk People's Republic (DPR) and Luhansk People's Republic (LPR). He suggested that the upcoming presidential elections in Russia on March 18 could become a "convenient pretext" for such a provocation.

"It would be naive to believe that Moscow has no counter-arguments and options for an adequate and intelligible response," the journalist concluded.

The views and opinions expressed by Sergei Ilyin are those of the contributor and do not necessarily reflect those of Sputnik.