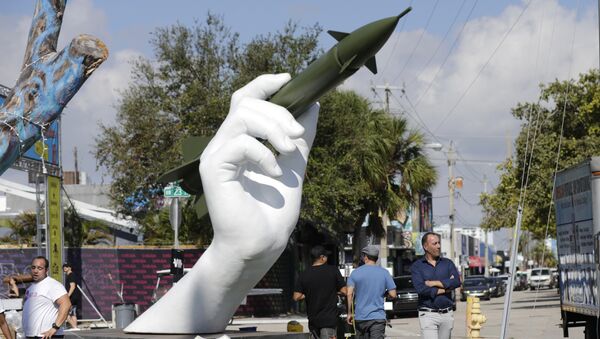 © AP Photo / Lynne Sladky
Subscribe
International
India
Africa
The US has released its nuclear posture review which paves way for the modernization and expansion of US nuclear capabilities. US officials argued that expansion of low-yield nuclear capabilities would allow the US to deter Russia from using nuclear weapons. Radio Sputnik talked to David Schultz, political science professor at Hamline University.

David Schultz: What I find controversial about it was the sentence that we are moving into a different era now where it’s talking about what’s called low-yield nuclear bombs. Now that’s a misnomer, low-yield is still as powerful as the bombs that were released on Hiroshima and Nagasaki, which means they can still do a lot of destruction. But what this policy said now is that we are going to arm both our submarines, in terms of providing cruise missiles with nuclear weapons and also we are going to put them in places where we make it possible to make them more mobile.

What I see it does is a couple of things. It opens up the prospect to say that maybe we are willing to consider limited low-yield nuclear war as a defense strategy. And then two it starts to move us into a situation of taking us back to the old cold-war nuclear escalation strategies.

Sputnik: Why is Russia being named as a target when all this nuclear saber-rattling has been going on between North Korea and the US?

David Schultz: I think [historically] to say that the United States and the Russian Federation need to recognize each other’s legitimate security interest and security needs. I think it’s important. The second is both countries need to assess each country’s overall defense strategies. So what I mean by that is that the worst part of the cold war era, taking us back 50’s, 60’s and 70’s, was to say that each country had to have superiority in each form of weapon. And it just created this overall race and every kind of nuclear weapon as opposed to say, how we again, recognize legitimate needs in terms of their countries.

Second I think you are correct that it ignores the fact that, perhaps right now, the more destabilizing force in the world might be the North Korea and it’s not necessarily that the Russian and the United States because they both have a big nuclear weapon have lots of incentives not to do anything. But the part that I think is scary here is when people start using phrases like low-yield nukes; it makes it sound like: well it’s okay to do limited nuclear wars and limited nuclear wars are still nuclear wars and they are still not good.

Sputnik: Do you think there are any other reasons behind this particular nuclear posture? Are there perhaps financial reasons?

David Schultz: I would say this reflects the re-militarization or the militarization of Trump’s foreign policy. I think Donald Trump has a “us versus them” policy. It’s a belief that the United States continues to maintain not just nuclear strength, but surpass nuclear superiority across the world. I think there are some economic reasons in terms of military industrial complex. But I think they are on a broader sort of unilateral, nationalistic policy behind Trump administration’s decision to do this.

Sputnik: Do you think due to this we can expect a new arms race, if so who will be involved in it?

David Schultz: I definitely think we will see a new arms race as a result because, to use an English expression, this is a tit for tat. We are claiming that Russia has low-level nukes whether it’s true or not, I don’t know. We are claiming we need more. That is going to force the Russians to have to escalate. It is going to then say the Chinese are going to be concerned because some of these missiles might be deployed in the Asian theater and this might now mean that North Korea feels threatened and feel the need to develop more. So it will create an arms race that might not just be Russia versus the United States, which has been our classic model for the cold war. It was a bi-polar world. Now in a multi-polar world we might see multiple countries involved with nuclear arms race and the more players that are involved, more complex it is.

The views and opinions expressed by David Schultz are those of the speaker and do not necessarily reflect those of Sputnik.