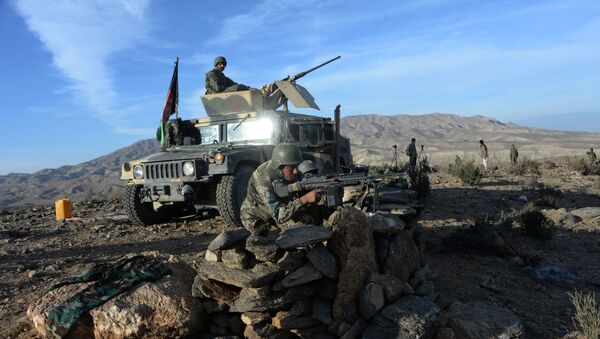 © AFP 2021 / NOORULLAH SHIRZADA / POOL
Subscribe
Nangarhar Province, along Afghanistan’s eastern border with Pakistan, was the deadliest place in the world for US troops over the last year, according to a new report that comes on the heels of the US move to end security aid to Pakistan for its role in harboring terrorist groups on its soil to conduct attacks against US troops in Afghanistan.

As New Year's Day celebrations took place across the world, the US military sustained its first death of the year during a firefight in Nangarhar's Achin district — the same district where the GBU-43 "Massive Ordnance Air Blast" or "Mother of All Bombs" was dropped last April. US Army Green Beret Mihail Golin, who joined the military after emigrating from Latvia, was killed during a routine patrol, Stars and Stripes reports, the eighth death of a US troop in Nangarhar over the past 12 months.

At least 31 US troops died in combat last year, according to Defense Department data, across combat theaters in Iraq, Syria, Somalia, Niger, Yemen and Afghanistan. By comparison, 26 military personnel were killed in action in 2016.

The increased in bloodshed may be a sign of things to come in Afghanistan. US President Donald Trump broke with campaign promises in an August speech announcing the US would step up the fight in that country. US force levels have ticked up from around 11,000 troops in Afghanistan to at least 14,000 in 2017, according to Stars and Stripes.

"We can confirm that we are suspending security assistance to Pakistan at this time," US State Department spokeswoman Heather Nauert said last week, adding that Washington considers Pakistan to be "destabilizing the region and also targeting US personnel."

"Today, the biggest threat to the Afghan government is the Taliban. Fifty percent of the Taliban's budget is [from] Pakistan's direct aid," Amrollah Saleh, former National Security Director for Afghanistan, said Sunday at an Iranian Peace Studies Association meeting in Tehran.

It may not be wholly true that the Taliban specifically presents the greatest threat to US and Afghan government force. A Pashtun insurgency has long been a thorn in the US and NATO's side. According to the Naval Postgraduate School, 90 percent of Nangarhar's population is Pashtun.

As Matthew Hoh wrote in his 2009 resignation letter from the US State Department in protest of the Afghan War, "The Pashtun insurgency, which is composed of multiple, seemingly infinite local groups, is fed by what is perceived by the Pashtun people as a continued and sustained assault, going back centuries, on Pashtun land, culture, traditions and religion by internal and external enemies… I have observed that the bulk of the insurgency fights not for the white banner of the Taliban, but rather against the presence of foreign soldiers and taxes imposed by an unrepresentative government in Kabul."