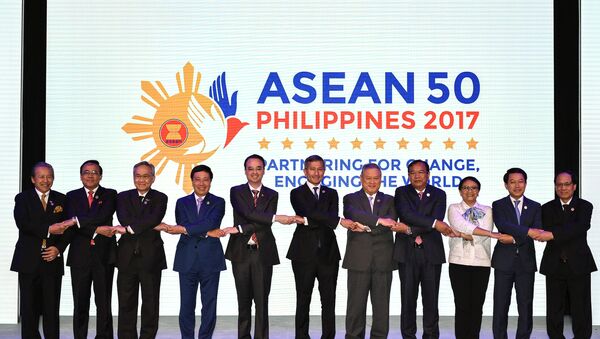 © REUTERS / Mohd Rasfan/Pool
Subscribe
India's "Act East" policy, originally conceived as an economic initiative, has taken on political, strategic, cultural dimensions including the establishment of institutional mechanisms for dialogue and cooperation. It is also one of New Delhi's many endeavors aimed at countering Beijing's influence in the region.

New Delhi (Sputnik) — Ahead of the India-ASEAN (Association of Southeast Asian Nations), commemorative summit to be held in New Delhi on January 25 and the subsequent participation of ASEAN leaders as chief guests in India's Republic Day celebration on January 26, the Indian external affairs Minister Sushma Swaraj is visiting three key nations of the ASEAN bloc from January 4 to 8.

India Seeks to Strengthen Relations With ASEAN Bloc to Counter China
Swaraj's tour of Thailand, Indonesia, and Singapore — the founding members of ASEAN is being seen as India's attempt to lend vigor to its Act East policy which focuses on the extended neighborhood in the Asia-Pacific region.

During the first leg of this visit, the external affairs minister will be in Thailand on January 4-5. India-Thailand defense cooperation will be high on agenda.

"All aspects of bilateral relations with Thailand will be discussed with particular focus on political, defense and economic ties and on further enhancing India's engagement with ASEAN countries," Ministry of External Affairs said in a statement.

Thailand will assume the role of coordinator country for India-ASEAN relations in the middle of 2018.

The Indian foreign minister will be Indonesia on January 5-6 where she will co-chair the 5th meeting of the India-Indonesia Joint Commission with her Indonesian counterpart Retno Marsudi. Both the ministers will also inaugurate the second meeting of ASEAN-India Network of Think Tanks.

"As the biggest country in the ASEAN region with the largest economy, Indonesia is an important partner for India including in trade and strategic matters. In recent times, there has been intensive engagement between the two countries bilaterally, as well as plurilaterally. The Joint Commission meeting and other engagement of the external affairs minister will enable the two countries to chart out the course of the partnership during the year 2018," the external affairs ministry statement said.

During the visit, Sushma Swaraj will also meet the President of Indonesia and have other official engagements, including interacting with representatives of the Indian community. She will also meet the new Secretary General of ASEAN Lim Jock Hoi.

India, Thailand Pledge to Tackle Terror, Build Highway to Link Countries
Thereafter, Swaraj will travel on to Singapore where she will stay up to January 8. The Indian foreign minister will inaugurate the Regional Pravasi Bharatiya Divas (Non-resident Indian Day) of ASEAN countries on the 7th of January. It will be India's endeavor to reach out to ASEAN countries through this forum as delegates from all the ASEAN countries, including ministers, eminent personalities, business and socio-political leader shall be in attendance.
000000
Popular comments
good to see how the approach is providing dividends.
michael
4 January 2018, 01:22 GMT
000000
Newsfeed
0
New firstOld first
loader
LIVE
Заголовок открываемого материала
Access to the chat has been blocked for violating the rules . You will be able to participate again through:∞. If you do not agree with the blocking, please use the feedback form
The discussion is closed. You can participate in the discussion within 24 hours after the publication of the article.
To participate in the discussion
log in or register
loader
Chats
Заголовок открываемого материала
Worldwide
InternationalEnglishEnglishMundoEspañolSpanish
Europe
DeutschlandDeutschGermanFranceFrançaisFrenchΕλλάδαΕλληνικάGreekItaliaItalianoItalianČeská republikaČeštinaCzechPolskaPolskiPolishСрбиjаСрпскиSerbianLatvijaLatviešuLatvianLietuvaLietuviųLithuanianMoldovaMoldoveneascăMoldavianБеларусьБеларускiBelarusian
Transcaucasia
ԱրմենիաՀայերենArmenianАҧсныАҧсышәалаAbkhazХуссар ИрыстонИронауОssetianსაქართველოქართულიGeorgianAzərbaycanАzərbaycancaAzerbaijani
Middle East
Sputnik عربيArabicArabicTürkiyeTürkçeTurkishSputnik ایرانPersianPersianSputnik افغانستانDariDari
Central Asia
ҚазақстанҚазақ тіліKazakhКыргызстанКыргызчаKyrgyzOʻzbekistonЎзбекчаUzbekТоҷикистонТоҷикӣTajik
East & Southeast Asia
Việt NamTiếng ViệtVietnamese日本日本語Japanese俄罗斯卫星通讯社中文（简体）Chinese (simplified)俄罗斯卫星通讯社中文（繁体）Chinese (traditional)
South America
BrasilPortuguêsPortuguese
NewsfeedBreaking
05:47 GMTBoris Johnson 'Backing Construction of Fleet of Mini Nuclear Reactors' as UK Gripped by Fuel Crisis
05:43 GMTRussia's Only Active Female Cosmonaut Could Set New Record For Duration of Space Stay
05:29 GMT'Are They Paid Actors?' Ex-UK Health Secretary Mocked for 'Comeback Video' in His Constituency
04:30 GMTGoing Scuba Diving: Adorable Golden Retriever Pup Sleeps in Water Bowl
04:00 GMTNewsom: California to Nix the Word 'Alien' From State Laws on Immigration
03:45 GMTMexican Soldiers Detained by Border Patrol Near Puente Libre - Authorities
03:35 GMTUN Secretary General Holds Talks With Foreign Ministers of Armenia, Azerbaijan
03:25 GMT'Country Has Gone to Hell': Trump Urges US Voters to Back 'America First' GOP Ahead of 2024 Election
03:18 GMTRussia Has ‘Thoughtful Optimism’ on Possibility of Restoring Iran Nuclear Deal - Lavrov
03:01 GMTMcConnell Refuses to Rule Out GOP Blockade of a Biden SCOTUS Nominee
00:38 GMTVideo: Amtrak Cross-Country Train Derails in Montana, Leaves Dozens Injured & At Least 3 Dead
00:00 GMTGerman Voters Going to Polls in Election That Marks End of Merkel's 16 Years as Chancellor
YesterdayVenezuelan Government Delegation Arrives in Mexico For Talks With Opposition - Maduro
YesterdayLavrov Says Borrell Told Russia to Get Out of Africa
YesterdayFour Teens Charged With Plotting School Attack on 25th Anniversary of Columbine Shooting
YesterdayMagnitude 5.0 Earthquake Rocks Taiwan - EMSC
YesterdayGermany Election: Merkel Warns Country's ‘Future’ at Stake Over Possible Left Swing
YesterdayAnthony Joshua Suffers Shock Loss to Oleksandr Usyk as Big Time Boxing Returns to UK After Pandemic
Yesterday'Things Happen': Trump Says 'Bad Call' From Doctor Would Possibly Prevent 2024 Election Run
YesterdayNorth Korea Ready for Talks With South on Ending 71-Year State of War